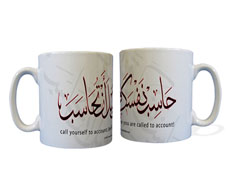 Calling ourselves to account is what frees the soul from being captive to its desires and lusts; it frees it from the darkness of misguidance and maintains it upon the Straight Path. Allah encourages the Muslims to do this by saying (what means): “O you who have believed! Fear Allah. And let every soul look to what it has put forth for tomorrow…” [Quran 59: 18] ‘Umar, may Allah be pleased with him, said: “Call yourself to account when you are in bliss before the reckoning of that severe Day, for whoever calls himself to account when he is in bliss will win the pleasure of Allah and achieve happiness, and whoever allows his life and desires to occupy all his attention and cause him to be negligent will be a regretful loser.”

said: “Allah will be merciful with the slave who asks himself: `Didn’t you do such and such?` and reproaches himself for doing so, then forces himself to adhere to the commandments of Allah and leads himself to righteousness.”
Maymoon bin Mahraan

said: “A pious believer holds himself to account more severely than a stingy man does with his business partner."
Our Salaf

would admonish themselves and hold themselves to account, while we on the other hand, who are far worthier of such reproach, are utterly heedless of this, despite us committing actions that are destructive and despite our being afflicted with diseases of the heart and soul that require major reformation.
We must ask ourselves do we fear Allah as He should be feared? Do we cry out of fear of Him as our Salaf

would do? Are we moved when we hear verses of the Quran being recited? Do our hearts shiver and tremble from fear when Allah is mentioned and therefore rush to obey and please Him? Allah Says (what means): “Allah has sent down the best statement: a consistent book wherein is reiteration. The skins shiver therefrom of those who fear their Lord; then their skins and their hearts relax at the remembrance [i.e., mention] of Allah…” [Quran 39: 23]
Once Imaam Al-Maroozi

replied: “My morning is that of one whose Lord is commanding him to fulfil his obligations, whose Messenger

is demanding him to apply his Sunnah, who has two angels requesting him to reform his actions, whose lower self is leading him to give in to his desires, who has Satan beautifying sin and immorality for him, who has the angel of death awaiting the command to take his soul, and whose family is asking for provision.”
How many times do we hear the mention of the Hellfire without it moving us? Does it not contain all forms of punishments or terror, the mention of which would crack a mountain, if it were to hear it, out of fear of Allah?
A Muslim should rebuke himself for not being moved or affected when hearing verses that address the Hereafter, punishment in Hellfire, and the general mention of Allah and His might. Undoubtedly, we are busied by this worldly life and our sins are too many, and therefore we must exert far greater effort in holding ourselves to account. The following are some matters that one needs to pay closer attention to and hold himself to account regarding:
Sincerity: Our Salaf

would prefer hiding their good deeds from others, as this helps a person maintain his sincerity of intention. Conversely, people nowadays like to show off and love others praising them for performing good deeds that they witness them doing; this is certainly something that requires self-rebuke in order to straighten our hearts and souls.
A person nowadays rejoices when praised, whereas he may be committing so many sins that had others known about it, they would have rebuked him rather than praise him. Our Salaf

would hate being praised and would sometimes even be enraged by it. Once a man praised Imaam Ahmad

saying: “May Allah reward you for what you have done in service of Islam.” He

replied: “Me? Who am I? What am I?” He lowered and humbled himself before Allah. Compare this reaction to ours! They would reject any praise whereas we listen to it with joy and request more.
Wealth: If one of us receives any wealth, he rejoices and his heart becomes attached to it. Conversely, our Salaf

would re-distribute any wealth they received in every good field in all directions.
People in our time are extremely busy in trade, business and commerce, endeavouring to collect ever more wealth. Their hearts have therefore hardened so much that the following saying of the Prophet

applies to them; Abu Hurayrah, may Allah be pleased with him, reported that the Prophet

on that day.
Submitting to the truth: In general, we do not submit to the truth easily, and it may be that some of us refuse to submit at all. We may realise our faults yet refuse arrogantly to rectify ourselves; someone may advise us about a certain matter, but we would defend ourselves while knowing that the advisor is speaking the truth.
Some of the people of knowledge nowadays argue and refuse to adhere to a text presented by another person simply because they have not heard it from those under whom they studied. The Salaf

on the other hand, would adhere and submit to the truth as soon as it was presented to them.
Along the same lines, many people nowadays are fearless enough to rush into passing judgement and giving rulings on certain issues when they neither posses the knowledge to do so nor have any evidence to substantiate their statements. This is a dispraised form of courage, because the same people would not dare address any other topic, such as a worldly topic like medicine which requires specialised and informed opinion; they would in this case readily admit that the topic is a specialised one that requires a specialist to address it, and yet they dare to talk about matters of the religion without the slightest problem, as if religion is of less importance than scientific knowledge.
Naafi’