What is after Ramadan? 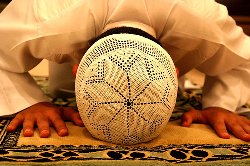 With the end or Ramadan drawing near, we- Muslims- thank Allah for the blessing of giving us the opportunity to fast and observe the night prayers during this blessed month, for making that easy for us and saving us from the Hell-Fire.

Such is how days and nights pass so quickly. Yesterday, we were receiving Ramadan and today we are bidding it farewell and we do not know whether we are going to live to witness the next Ramadan or not. We beseech Allah to let us have many more of it.
All righteous deeds should be concluded with Istighfaar (seeking Allah’s forgiveness). Prayers, Hajj, night prayers and meetings are all concluded with it too. Fasting should also be concluded with Istighfaar to amend for any act of forgetfulness, negligence or perversion we might have committed. Istighfaarerases the feeling of arrogance and ostentation from the heart and lets one feel his shortcomings. It is this very feeling that leads to doing more righteous deeds after Ramadan and getting more rewards.
Explaining the need for Istighfaar, Ibn Al-Qayyim

said: “Having pleasure and contentedness for merely doing an act of obedience is of the frivolities of the mind and its stupidity, for, the resolute and knowledgeable people do more Istighfaar immediately after each act of worship because they recognize their shortcomings and their failure to give Allah what befits His Majesty and Greatness in that act.”
Though we are now bidding farewell to Ramadan, this should not mean a farewell to acts of worship. A Muslim should rather strengthen the tie between himself and his Lord so that he may have a perpetual blessing. As for those who break their covenant with their Lord and abandon mosques as soon as Ramadan ends, such are miserable people who know their Lord only in Ramadan and afterwards turn back on their heels. Allah Says (what means): “Say (O Muhammad): ‘Indeed, my prayer, my rites of sacrifice, my living and my dying are for Allah, Lord of the worlds.’”[Quran 6: 162]
There is no value in an act of worship by which one does not increase in piety and fear of Allah. Where is the impact of fasting when one abandons the recitation of the Quran, no longer observes the congregational prayers and desecrates other people’s honors? Where is the impact of his acts of worship in Ramadan when one afterwards consumes usury and takes other people’s properties wrongfully? Where is the impact of Ramadan when one abandons the path of the Messenger of Allah

for local customs and traditions and governs his life with man-made laws? Where is the effect of fasting and night prayers if one engages in acts of deception in his business transactions and lies day and night? Where is the impact of Ramadan on him if he does not call the misled to the Path of Allah, feed the hungry, cloth the naked and make a sincere supplication for Islam and the Muslims?
Ibn Al Qayyim

said: “There is indeed a distance between a righteous deed and the heart, and there are in that distance a lot of impediments that prevent the deed from reaching the heart. Hence, you see a man who has many deeds to his credit and yet nothing of that finds its way to his hearts, for he never carried out the deed out of love for Allah, fear of Him, hope in His mercy, in abstention from worldly life or out of craving for the Hereafter. Neither does he possess the light by which he can differentiate between those who love Allah and His enemies. Had the impact of his deed reached his heart, he would have had the light and recognize the truth and falsehood.”
Needless to say, Allah does not need the movements and efforts that we make in our acts of worship. He only requests our piety thereof. He, The Alimghy, Says (what means): “O you who have believed, decreed upon you is fasting as it was decreed upon those before you that you may become righteous.”[Quran 2: 183]
He also says (what means): “Their meat will not reach Allah, nor will their blood, but what reaches Him is piety from you.”[Quran 22: 37]
Of the good deeds that are recommended after Ramadan is fasting for six days in the month of Shawwaal. The Messenger of Allah

said: “Whoever fasts the month of Ramadan and follows it up with a fasting of six days in the month of Shawwaal is like the one who fasts for a complete year.” [Muslim]
Ramadan has filled our minds with blessings, awakened our conscience and purified our souls. It has taught us how to resist the insinuations of Satan and the whims of the evil inclining soul and how to eliminate differences and its causes. The ranks of the Muslims have become solidly united during Ramadan, so we should not let it become disunited again after it. The eyes have shed tears during Ramadan, so we should not let them become dry after it; mosques have become full of worshippers during Ramadan and the tongues were engaged mentioning Allah, praising Him and invoking Him, so let this continue after Ramadan; we have been overwhelmed with desirable manners and characteristics such as humbleness and tranquility during Ramadan, we should not spoil that away with arrogance, ostentation and stupidity; we have become generous during Ramadan, so we should not withhold our generosity after Ramadan.
The fasting Muslim has two occasions of happiness: when he brakes his fast and when he meets his Lord; one is a worldly happiness and the other is the everlasting one in the Hereafter when he will have the greatest enjoyment and bliss which is Paradise in which there are enjoyments which no eyes have ever seen, no ears have ever heard of, and no human mind has ever imagined- a place where we, Allah willing, will be addressed (what means): “Eat and drink in satisfaction for what you put forth in the days past."[Quran 69:24]
Such is Paradise which when a slave is made to enter it, he forgets his misery, distress and sorrow as it is reported that the Messenger

said: “The most unfortunate person in this world among the people of Paradise will be given a short dip into the Paradise and he will be asked: ‘Have you ever known misery? Have you ever experienced difficulty’? He (or she) would say: ‘No, by Allah, I have never experienced any misery nor known any difficulty!’” [Muslim]
The Muslim nation is now bidding farewell to the blessed month of Ramadan while its agonies are still ongoing. It is experiencing great calamities that can be seen in what is happening in Palestine and other places in the Muslim world; a merciless war aimed at Islam in order to exterminate it.
The Islamic nation has been tested during its long history with different kinds of conspiracies and afflictions some of which are enough to wipe other nations out of existence, but the power of Islamic belief that was and is still keeping this nation alive. This gives us a hope that the future is certainly for Islam.
It is therefore a duty of all Muslims to help the causes of Islam, to exercise patience and self-control, to make sincere supplications and to seek the help from Allah in the face of all these tribulations so that He may rescue us from all these sufferings.