Casualties of another war 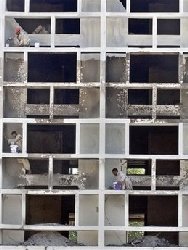 The deadly blast in Islamabad was a revenge attack for what has been going on over the past few weeks in the badlands of the North-West Frontier. It highlighted the crisis confronting the new government in the wake of intensified US strikes in the tribal areas on the Afghan border.

Hellfire missiles, drones, special operation raids inside Pakistan and the resulting deaths of innocents have fuelled Pashtun nationalism. It is this spillage from the war in Afghanistan that is now destabilizing Pakistan.
The de facto prime minister of the country, an unelected crony of President Zardari and now his chief adviser, Rehman Malik, said, "our enemies don't want to see democracy flourishing in the country". This was rich coming from him, but in reality it has little to do with all that. It is the consequence of a supposedly "good war" in Afghanistan that has now gone badly wrong. The director of US National Intelligence, Michael McConnell, admits as much, saying the Afghan leadership must deal with the "endemic corruption and pervasive poppy cultivation and drug trafficking" that is to blame for the rise of the neo-Taliban.
The majority of Pakistanis are opposed to the US presence in the region, viewing it as the most serious threat to peace. Why, then, has the US decided to destabilize a crucial ally? Within Pakistan, some analysts argue this is a carefully coordinated move to weaken the Pakistani state by creating a crisis that extends way beyond the frontier with Afghanistan. Its ultimate aim, they claim, would be the extraction of the Pakistani military's nuclear fangs. If this were the case, it would imply Washington was determined to break up Pakistan, since the country would not survive a disaster on that scale.
In my view, however, the expansion of the war relates far more to the Bush administration's disastrous occupation in Afghanistan. It is hardly a secret that President Karzai's regime is becoming more isolated each passing day, as Taliban guerrillas move ever closer to Kabul.
When in doubt, escalate the war, is an old imperial motto. The strikes against Pakistan represent - like the decisions of President Richard Nixon and Henry Kissinger, to bomb and then invade Cambodia - a desperate bid to salvage a war that was never good, but has now gone badly wrong.
It is true that those resisting the Nato occupation cross the Pakistan-Afghan border with ease. However, the US has often engaged in quiet negotiations with them. Several feelers have been put out to the Taliban in Pakistan, while US intelligence experts regularly check into the Serena hotel in Swat to meet Maulana Fazlullah, a local pro-Taliban leader.
Pashtuns in Peshawar, hitherto regarded as secular liberals, told the BBC only last week that they had lost all faith in the west. The decision to violate the country's sovereignty at will had sent them in the direction of the insurgents.
While there is much grieving for the Marriott hotel casualties, some ask why the lives of those killed by Predator drones or missile attacks are considered to be of less value. In recent weeks almost 100 innocent people have died in this fashion. No outrage and global media coverage for them.
Why was the Marriot targeted? Two explanations have surfaced in the media. The first is that there was a planned dinner for the president and his cabinet there that night, which was cancelled at the last moment.
The second, reported in the respected Pakistani English-language newspaper, Dawn, is that "a top secret operation of the US Marines [was] going on inside the Marriott when it was attacked". According to the paper: "Well-equipped security officers from the US embassy were seen on the spot soon after the explosions. However, they left the scene shortly afterwards."
The country's largest newspaper, the News, also reported on Sunday that witnesses had seen US embassy steel boxes being carried into the Marriott at night on September 17. According to the paper, the steel boxes were permitted to circumvent security scanners stationed at the hotel entrance.
Mumtaz Alam, a member of parliament, witnessed this. He wanted to leave the hotel but, owing to the heavy security, he was not permitted to leave at the time and is threatening to raise the issue in parliament.
These may be the motivations for this particular attack, but behind it all is the shadow of an expanding war.
PHOTO CAPTION
Pakistani workers paint the walls of Marriott hotel following suicide bombing last week in Islamabad, Pakistan on Tuesday, Sept 23, 2008.
Source: The Guardian