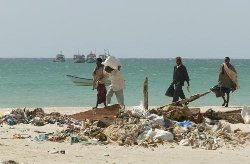 Somali pirates have accused European firms of dumping toxic waste off the Somali coast and are demanding an $8m ransom for the return of a Ukranian ship they captured, saying the money will go towards cleaning up the waste.