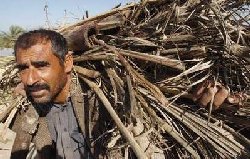 Gaza Strip residents are going back to the days of kerosene stoves and firewood-gathering as Israel's blockade of foreign aid supplies of fuel and food bites much deeper.

Bakeries in the territory are now using low-quality grain or animal feed to produce bread.
Israel closed border crossings to Gaza although it has to lift siege according to the truce with Hamas.
In the meantime, roughly half of Gaza's 1.5 million people are running out of the aid supplies they depend on.
"There is no cooking gas and we need to cook and make tea for ourselves," said father-of-eight Ibrahim Al-Laham.
Al-Laham now spends five hours each day scouring land near his home in Khan Younis in southern Gaza Strip for firewood.
"The situation is difficult. The siege is difficult and there is no work," he said, kindling a little fire for tea as his barefoot children played in the yard.
Donkeys loaded with dry branches are becoming a common sight as bakeries in Gaza City also turn to firewood, having run out of bottled propane gas.
Diesel and petrol are still being brought through underground pipelines from neighboring Egypt.
But millers say they have run out of regular grain, and some bakeries have started using cereals usually fed to livestock.
"What is left is for us is to grow our nails and eat rats," said one man bitterly, as he queued for bread. "Israel and the Arabs are pushing us to explode. God willing we will explode in their faces."
Israel still denies there is any humanitarian crisis in Gaza and insists it is not trying to cause one.
But the United Nations says a crisis could quickly develop.
Authorities warn that drinking water from wells in the coastal territory may be contaminated as reserves of chlorine dwindle and purification equipment runs out of spare parts.
But it's an ill wind that blows nobody any good.
At one Gaza market, business was brisk as residents lined up at a specialist store to have local experts clean and repair their long abandoned kerosene stoves.
"We stopped using the stove several years ago," said a woman named Hana. "But now there's no cooking gas and no electricity."
Kerosene is not allowed into Gaza, but with the ingenuity borne of siege necessity, Gazans have replaced it with diesel mixed with salt, which cleans and lightens the fuel.
Hamas's health minister, Basim Naeem, said the largest hospitals in Gaza are also out of cooking gas, making it difficult for them to cook meals for patients.
Basic medical equipment could not be properly repaired, forcing some patients to turn to expensive private clinics.
Naeem said Israel's opening of the crossings on Monday to let in a limited amount of food and fuel was not enough to make up for three weeks of closure.
"We are talking about a comprehensive deterioration ... We are talking about a real crisis that cannot be alleviated by these Zionist tricks," Naeem said.
Fuel shortages of fuel have almost paralyzed the work of 3,000 Gaza fishermen, whose boats now mostly lie idle.
"Even when we catch some fish, people do not buy because they do not have gas to cook it with," said Zuhair Abu Reyala, a fisherman who supports a family of 17.
PHOTO CAPTION
A Palestinian man holds wood as he walks in a street in the southern Gaza Strip November 23, 2008.
Source: Reuters