Half of Afghan prisoners have not faced trial: UN 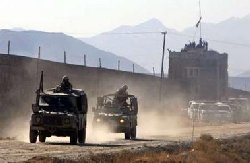 More Afghans are being detained without trial, with poor people or those without powerful connections, the most common victims, unable to pay bribes to secure their release, the United Nations said on Monday.

Afghanistan is emerging from nearly 30 years of war and its judicial and law enforcement systems are still very much in their infancy. Corruption is endemic at all levels of the police force, experts say, who often milk the populace for bribes.
"Pre-trial detention is supposed to be the exception and not the rule, but in this country it is more the rule, especially if you are poor and without powerful friends," said Christina Oguz, head of the U.N.'s drug and crime agency in Afghanistan.
Speaking at a news conference in Kabul on Monday, Oguz talked about the prevalence of what she called, "telephone justice", whereby a phonecall to the right police officer or judge was sometimes all that was needed to be released.
"If you have powerful friends and commit a crime you may not even face a trial because a phonecall to the police or to the prosecutor can be made to release you," said Oguz.
"If you don't have these powerful friends you may end up behind bars even if you are a child," she said.
While the number of prisoners in Afghanistan remains relatively low, the figure has more than doubled in the last three years, says the U.N., with 12,500 prisoners in the country compared with 6,000 in January 2006.
In December 2007, the U.N. estimated that around 50 percent of prisoners were pre-trial detainees.
Another problem facing prisoners in Afghanistan, said Oguz, is that many often remain in jail long after their sentence has expired, in effect serving "double" sentences as they are unable to pay the additional fine.
"If you are poor, again, you may end up staying in prison even though your prison sentence has ended because you cannot pay your fund or you cannot bribe yourself out," said Oguz.
"We have found many cases of people who are still in prison after their time has been served," she said.
Oguz said that Afghanistan needed to look to alternatives to imprisonment, such as suspended sentences, house arrests and fines but not on top of any prison sentence.
"Prison should not be the first sentence that comes to your mind for the majority of cases," she said. "Prison is often a very expensive way of making a bad situation worse."
PHOTO CAPTION
NATO vehicles drive outside the main gate of the Pul-i-Charkhi prison on the eastern outskirts of Kabul, Afghanistan, February 26, 2006.
Source: Reuters