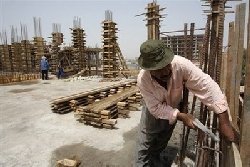 The US-led force's $100bn effort to rebuild Iraq has failed amid bureaucratic quarrels, ignorance of Iraqi society and violence in the country, the New York Times says, quoting a US federal report.

The newspaper said on its website on Saturday that it had obtained a draft copy of Hard Lessons: The Iraq Reconstruction Experience, which is circulating among senior officials.
The report was compiled by the Office of the Special Inspector-General for Iraq Reconstruction, which is led by Stuart Bowen Jr, a Republican lawyer.
In the report, Colin Powell, the former US secretary of state, alleges that after the 2003 invasion the US defense department kept inflating figures on the number of Iraqi security forces on the ground.
The defense department "kept inventing numbers of Iraqi security forces - the number would jump 20,000 a week! We now have 80,000, we now have 100,000, we now have 120,000", he is quoted as saying in the draft report.
The report says that Powell's view was supported by Lieutenant-General Ricardo Sanchez, the most senior ground troops officer in Iraq, and Paul Bremer, who was the civilian administrator before the Iraqi government takeover in June 2004.
It concludes that the US government does not have the policies or the organizational structure required to put the largest reconstruction program since the Marshall Plan into place, the newspaper reported.
Cronyism alleged
The rebuilding effort did not go beyond restoring what was destroyed during the invasion and its immediate aftermath, the newspaper cited the draft report as saying.
By mid-2008, the report says, $117bn had been spent on the reconstruction of Iraq, including about $50bn in US taxpayer money.
But Ahmed Rushdi, an Iraqi journalist, said that the money had been squandered or taken by corrupt officials.
"When you are talking about 117 billion dollars, you are talking about stolen money, misused money, and poor planning. But the Americans and the Iraqis said that these monies were being spent on security," he told Al Jazeera.
"I think Americans and some Iraqis have got very rich [off the funds] and they decided to get rid of all their documents which would show that something was wrong, particularly in Paul Bremer's administration."
"We must make a rule on how to charge these people with crimes."
In one example, an official at the US Agency for International Development (USAID) was given four hours to work out how many miles of Iraqi roads needed to be repaired, the Times said.
The official's estimate came from documents in USAID's library and was then submitted into a master plan.
Furthermore, funding for a large amount of Iraqi reconstruction projects was divided up among local politicians and tribal leaders, according to the New York Times.
"Our district council chairman has become the Tony Soprano of Rasheed, in terms of controlling resources," it quotes one US embassy official in Baghdad as saying.
"You will use my contractor or the work will not get done.'"
Political lobbying
The report also pointed to political maneuvering in the US, highlighting an example where a Republican lobbyist working for the US occupation authority called on the Office of Management and Budget to fund $20bn in new reconstruction money in August 2003.
"To delay getting our funds would be a political disaster for the president [George Bush]," Tom Korologos, the lobbyist, said, according the report.
"[Bush's] election will hang for a large part on show of progress in Iraq and without the funding this year, progress will grind to a halt," the draft quoted Korologos as saying.
The Bush administration supported Korologos' request and the US congress allocated the money later that year.
The draft report is based on about 500 interviews and more than 600 audits, inspections and investigations undertaken in Iraq over several years.
PHOTO CAPTION
Iraqis work at a new construction site in Baghdad in August 2008 [AFP].
Source: Aljazeera.net