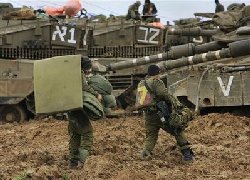 Maintaining a night vigil along the border with Israel, Hamas fighters sat within reach of a device connected to wires running underground.

"What you see are little surprises, but what awaits (the Israelis) is beyond their imagination," said Abu Sakher, a Hamas battalion commander making the rounds of frontier positions held by his men awaiting a possible invasion of the Gaza Strip.
Abu Sakher did not elaborate, but the wires were attached to a battery-like device that might have been a detonator for a landmine to be used against Israeli armor or infantry.
"Not only are our surprises hidden, but so are our men, and if the Zionists enter, they will be met where they never expected to be confronted," he said.
Hamas's armed wing is believed to have 25,000 fighters, some of them members of engineers unit of bomb- and rocket-making experts.
Hamas officials said the air offensive Israel began on Saturday has failed to weaken the Islamist group, despite the deaths of at least 200 members of its forces in the bombings.
Hamas rockets have now reached deep into southern Israel in response to its deadly attacks, hitting the major city of Beersheba, 40 km (24 miles) from the Gaza Strip.
"Zionist tanks were seen moving along the border line and warplanes returned east. Please take care, and again we stress that every fighter should turn off his mobile telephone and remove its battery," a voice said on the radio.
Checking on his men's positions, Abu Sakher told one fighter to keep his rifle at hand.
"Is your RPG (rocket-propelled grenade launcher) ready?" the commander asked.
Two fighters, opening a box containing sandwiches and a bottle of Coca-Cola, shared their thoughts about the Israeli soldiers they may soon have to face.
"The difference between us and them is that they await passionately for the day they can return home safely, while we leave our houses, bid farewell to our families and hope to die as martyrs," one of the men said.
"We will tear them like this," said the other, taking a bite of his meat sandwich.
PHOTO CAPTION
Israeli soldiers carry equipment through the mud at a staging area for tanks on the Israel-Gaza border.
Source: Reuters