Qaradawi: God will not allow you (West, US) to support injustice 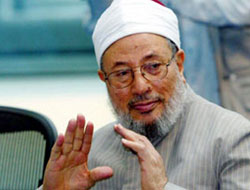 The prominent Muslim scholar Dr. Youssef al-Qaradaawi strongly criticized Israel over its unjust assault on Gaza and appealed to the United States to end its support for the Jewish state.

"Our message to the aggressor Jews ... who rely on the power, money, arms of America and its veto power (at the U.N.) is that the time of God's promised justice has come, your day has come," said Dr. Youssef al-Qaradaawi.
"We say to the West and America in particular: God will not allow you to support injustice against justice and the wrong against the right (forever)," Dr. Qaradaawi said in a Friday prayers' sermon, aired partly on the Qatari-based Al-Jazeera television.
His remarks appeared to be unusually harsh coming from Qatar.
Dr. Qaradaawi also criticized Arab and Muslim leaders for not doing enough to counter Israel attacks on the Gaza Strip, even after widespread popular demonstrations in their countries.
Al-Jazeera showed marchers voicing support for Palestinians in Gaza after Friday prayers in Doha.
Qatar, which said last week Israel's attacks amounted to a war crime, has called unsuccessfully for an emergency Arab summit on Gaza where nearly 900 Palestinians have been killed, at least a third of victims were children, since Israel's offensive began on Dec 27.
PHOTO CAPTION
The prominent scholar Dr. Yussef Qaradaawi
Source: Reuters