Israeli crimes on Palestinians before and after Hamas 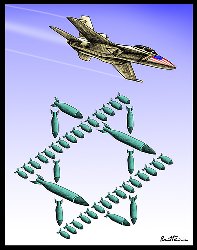 Startling-and stomach turning: where Palestinians are involved, memory and sense of proportion fail us. The Jewish conscience, justifiably, has long called upon the world's powers and upon their citizens to remain vigilant, never to forget -in the name of "the duty of memory"- the atrocities, massacres and genocides of the past. But where the State of Israel is involved, we are expected to set all sense of proportion aside, to leap to conclusions. Suddenly, it would be assumed that these are two equally powerful belligerents. After a six-month ceasefire, one of the two parties to the conflict (the Palestinians) is said to have broken the truce by unleashing its rockets. The victim of aggression (Israel) is acting solely in self-defense-if we are to believe the version sold to the world by Israel, and relayed by complacent and complicit Western media with the full support of the Bush administration and of many European governments. The bravest among them can barely bring themselves to point out Israel's "disproportionate" reaction. What courage!

And, most of all, what lies! For decades-long before Hamas came to power-the Palestinians have seen their dignity trodden underfoot, their legitimate rights denied. From the Oslo "peace" accords to a succession of negotiations (more frequently compromises), from the repeated broken promises to media circus withdrawal schemes, the Palestinian representatives have achieved nothing for their people. Israeli governments, whether of the Left or the Right, stall for time, resort to lies, summarily execute their adversaries, and dismiss Palestinian civilian deaths as collateral in the name of Israel's security while continuing to expand illegal settlements and pursue a policy of "facts on the ground."
Many experts, including Richard Falk, United Nations special rapporteur for Human Rights in Occupied Palestine, have confirmed that Israeli policy fails to respect the Geneva Convention; that it has, by default, made the two-state solution almost impossible.
The Israeli government has fenced in the population of the West Bank (in complete disregard for United Nations General Assembly resolutions and the International Court); it has subjected the population of Gaza to a siege coupled with a blockade that has brought hunger, a shortage of medical supplies and care, and mass unemployment; it has created a state of despair. International humanitarian relief organizations are sharply restricted in their activities; badly needed food supplies are not getting through. The June 19 - December 19 truce was conditional on an end the siege and the blockade of Gaza, and partial opening the Egyptian border crossing. Neither Israel (nor Egypt) has respected these conditions; the Palestinian population has been the victim of inhuman treatment, for weeks, months and years now. Are we to ignore these realities in order to justify the massacres now unfolding before our eyes? Are the Palestinians responsible for their own misfortune because rockets were launched from Gaza? The failure of memory is compounded by a loss of all sense of proportion: the number of Israeli victims is now multiplied by a factor of one hundred, two hundred, three hundred Palestinian civilians murdered by Israeli government fiat.
Israel flaunts its contempt for the self-styled "international community", secure in unilateral support of the United States and the silence-in silent complicity-of European governments. An efficient communication strategy and a complacent media establishment (accompanied with the usual dose of predictable disinformation) allows the Israeli government to play for time, to inflict upon a population of one and one-half million human beings an inhuman siege, and now, a full-scale massacre. We have been reduced to spectators and our "neutrality" should have to protect us from our guilty conscience. Cynicism is at its paroxysm when we understand that the deaths of hundreds of Palestinian civilians depend upon the political calculations of Israel's leaders, eager to demonstrate their strength and determination with a view to the upcoming elections.
The Lebanese disarray during summer 2006 should be rectified. Mission accomplished: 80% of Israelis support the murderous operations in Gaza! Frightening!
Can we expect anything better from the "international community" of governments and states as we observe their reactions, both East and West? Theirs is the guilty silence of the accomplice; the hypocrisy; the waiting game; contempt for Palestinian lives-for whom the ideal solution would be Jordan, Lebanon, or some "permanently temporary" refugee camps. The time has come to create an international, global non-violent resistance movement against the violent, extremist policies of the State of Israel. We must mobilize world opinion by keeping the Palestinian issue in the public eye through ongoing, scrupulously accurate information; by writing articles, organizing conferences and demonstrations in support of the Palestinians, and by improving synergy between the efforts and activities of existing organizations. We know this much: the Palestinians may bend, but they will not break. We must continue to defend their legitimate rights on the ground. Around the world, we must support their resistance in a determined way. Israel, for all its awesome firepower, has not won the conflict; Israeli society faces deepening crises. It is a matter of utmost urgency that the State and the people of Israel realize that, for them, there can be no secure future, and ultimately, no survival, without recognition of the legitimate rights and the dignity of the Palestinians.
The strategy of playing for time, of willful blindness, of "shock and awe", of bloodshed and massacre offers no assurance of victory. On the contrary, it is a formula for defeat.
By: Tariq Ramadan (A Professor of Islamic Studies at the Faculty of Theology at Oxford)