Under siege again, but Gaza will not die 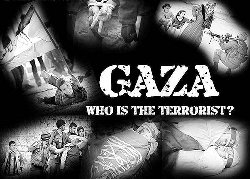 In a tent in front of Shifa hospital, the largest hospital in Gaza, a sign on the photo of a young child bleeding from wounds from the Israeli attack on Gaza read "Gaza Will Not Die."