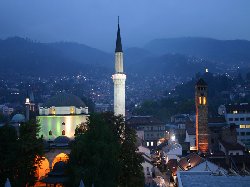 The first part of this article highlights the ways in which Islam was introduced in the Balkans, with the trade relations being the primary focus. In this part, other factors are highlighted, namely: military and political relations with Muslim countries.
By 634, the Muslims, in their attempt to spread Islam to every possible area, had started to attack the borders of the Byzantine Empire, and made the first attempt to conquer Constantinople (now Istanbul). Some years later, in 717-718, the Muslim army under the command of Maslamah

surrounded Constantinople, however, they could not conquer it. In this expedition, the Muslim army penetrated as far as Adrianople (now Edirne) and Salonika, and this was known as the first contact by the Muslim armies with the Balkan nations. They also built a mosque near Gallata, known as the Arab Mosque. This ledsome Arabs (Muslims) to settle in Constantinople and Salonika.
In the 9th century, the Muslims were more direct in their intentions towards the Balkan Peninsula. This was simple to understand because they conquered Crete in 823, Sicily in 827, and some parts of the Southern Italy as well, and the Balkan Peninsula was next in line.
During 840-841, the Muslims conquered Taranto, Italy, and undertook incursions into the Balkan Peninsula, conquering Budva, Kotor, Rosi, and Rijeka. They even surrounded Dubrovnik for fifteen years, but without any success. This was the time when the Illyro-Albanians had their first contacts with the Muslim armies. They kept trying to take over the Balkan Peninsula until 1023 when they lost control of the Southern Italy.
The traces of this new civilization are to be found everywhere. Nearby the cathedral of Trogir, there is a statue of an Arab man wearing turban, which is a sign of well established relationships. There also are the tombs of two Arabs, which is evidence that they must have been living there for some time.
On the other hand, the conquest of Spain by the Muslims opened a new chapter in their relations with the Balkan nations. Some of the Slav tribes, especially the Slovenians and Croats, had good relations with the Muslim Spain. In the royal court of Haakimi I (791-822) there were 2000 guards of Croatian origin. Such a large number of guards indicated the extensive relations between them.
This variety of military relations was extended to the politics, too. The Muslim countries had cordial relationship with their Balkan counterparts. In 856, the Serb king, Mikhail III, sent his envoy to the Caliph Al-Mutawakkil Ibn Ar-Rasheed of the Abbasid dynasty to arrange a form of debate on religious matters.
In 922, moved by the Islamic teachings, the Bulgarian king sent an envoy to Caliph Al-Muqtadir of the Abbasid dynasty to convey his family’s decision to embrace Islam.
In this point, well known are the contacts that Caliph Haroon Ar-Rasheed had established with the European rulers. He had sent his envoy to the Serb king, Carl the Great, in order to establish cordial and reciprocal relations.
The Croat ruler, Prince Tomislav, had good relations with caliph Abdur-Rahmaan III and even used to exchange gifts. Abdur-Rahmaan III had sent envoys to all the Slav kingdoms to discuss and charter their future relations.
The Europeans, the Balkan nations included, kept continuous contacts with the Muslims—the Fatimids (969-1171), the Ayyubids (1171-1250) and the Mamluks (1250-1517)—because of various interests, trade being one of them.
The Slavs were allies to the Muslims against the Roman and Byzantine Empires. However, their relations with the Illyro-Albanians will define the future military and political actors of the Balkan Peninsula. At the beginning, those relations were cordial, but changed rapidly.
Yet, there were various contacts between the Muslims and the Illyro-Albanians. The fact that the Illyro-Albanians were ruled by the foreigners—the Roman and Byzantine Empires, the Serbs, etc.—means that they were almost never identified as an independent political entity.
Missionaries and migrations
Maybe the most important factor that influenced the rapid spread of Islam among the Illyro-Albanians was the work of missionaries and migrations of different groups of people. There are indications that travelers and theologian visited almost every part of the peninsula centuries before the Ottomans appeared and played an important role in preaching Islam. This was in some way assisted by the fact that the Muslims controlled many territories around the Balkan Peninsula (Southern Italy, some Greek islands, the Asia Minor, etc.), and by the incursions of the Muslim armies as well.
Maybe the most important among the migrations was a group of Turkish Muslims who settled in Southern Hungary (near the border with the Byzantine Empire) and somewhere near the Ohrid Lake (Macedonia) as well (almost in the center of the peninsula). This was the time when the first concentrated Muslim dwellings were seen in the peninsula.
The Russian Czar Theofil, while fighting in the Asia Minor, forced many Muslims to migrate. They settled in the Balkan Peninsula in the valley of the Vardar River. They came to be known the "Turks of Vardar."

Yet, the presence of the Muslims in the Balkan Peninsula was so great that the Christian kingdoms could no longer tolerate them. Thus, in the 13th century, many crusades directed to the Middle East passed through the peninsula and exterminated the Muslims living there.

The spread of Islam in the Balkans – I