'Nonviolence' in Palestine: Timing and intentions 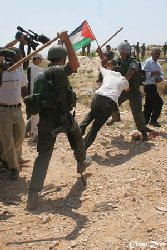 For the first 50 years and until the early 1990s, the Palestinian struggle for freedom was largely nonviolent. With occasional pockets of armed resistance, Palestinians in the occupied territories employed methods of general strikes, demonstrations and the like to voice their demand for freedom. And yet these were the years when Palestinians saw a greater part of their homeland swallowed up into what is now the State of Israel.

Land was stolen with no recompense to its owners, prisons burst at the seams with prisoners who never received a trial, houses were demolished by the hundreds, entire orchards of olive and fruit trees were ransacked and burned. So, it might be suggested that Palestinians gave nonviolent resistance more than a fair shot.
It seems there is a move to honor those broken and oppressed refugees who, in spite of more than 60 years of bondage, call for nonviolence or passive resistance. While the intention is good, one must question the timing.
Recently, the United Nations Development Program (UNDP) released a report entitled: “UN: 70 percent of Palestinian youth oppose violence to resolve conflict with Israel”. The report related to a survey that interviewed 1,200 youth in the West Bank and Gaza. The survey found that nearly 70 percent of young Palestinians do believe that the use of violence is “not helpful” to resolve the Palestinian-Israeli conflict. Only eight percent found violence a necessary tool, and it also found that 80 percent of young Palestinians are depressed, 55 percent being “extremely depressed”.
In recent months, Palestinians have endured some of the most painful blows since the early years of Israeli rule. The recent bloodletting in the Gaza Strip claimed the lives of more than 1,400 people. Human rights groups around the world decried the Israeli genocide as war crimes and some world leaders want the Israelis tried for war crimes and crimes against humanity. Cluster bombs, white phosphorus and other illegal weapons were unleashed on a starved and sieged civilian population. But the liquidation of Gaza was the main issue in Israeli elections, with voters preferring the most hawkish parties and leaders.
Amidst the grief and rage that followed, Belgium found it fitting to nominate one sorrow-stricken doctor and father of three lovely daughters from Gaza, for the Nobel Peace Prize, in recognition of his efforts to promote peace between Palestinians and Israelis. The 55-year-old physician, Ezzeldeen Abu Al-Aish, lost his three children when Israeli shells hit his house, crushing and suffocating all those inside. Dr. Abu Al-Aish just happened to be talking on Israeli television about the suffering of the people of Gaza when he was informed that the shell hit his home with his family inside. He suppressed his anguish long enough to express his hope that his daughters would be the last victims of Israel’s attack. In the midst of this mess, where is the call for Israel to embrace nonviolence? Would the media and the world community have pressed the Israelis to embrace nonviolence, had they endured such atrocities?
Just why does the UNDP find it fitting to highlight a survey that concludes that most Palestinian youth find violence “unhelpful” at such a time?
And why does the world honor a man who calls for reconciliation, a term that somehow suggests a conflict between people of equal standing? Some may suggest that nonviolent resistance in such situations is the embodiment of the dignified struggle.
Others might call it surrender.
PHOTO CAPTION
Israeli Soldiers beat a peaceful protestor in the West Bank village of Bil’in.
Source: Arab News