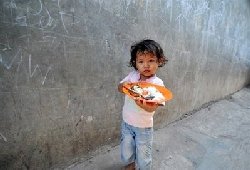 The global economic crisis is becoming a "human and development calamity" and is threatening to derail international efforts to reduce poverty, the International Monetary Fund (IMF) and World Bank have said.

The two financial institutions urged rich countries to step up aid to developing nations, as they completed their spring meetings in Washington on Sunday.
"The global economy has deteriorated dramatically ... Developing countries face especially serious consequences as the financial and economic crisis turns into a human and development calamity," they said in a statement.
The statement said that IMF and World Bank member states needed to meet pledges, including commitments to increase resources available for lending made at the London G20 summit, in order the tackle the problem.
But anti-poverty campaigners have criticized the IMF-World Bank meeting as "a wasted opportunity for poor countries", saying not enough was done.
"The poorest countries are still waiting for the bailout they've been promised to survive this crisis," Marita Hutjes, a senior adviser at Oxfam International, said.
"They moved heaven and earth for banks; the question is when will they put the money on the table for poor countries?" Hutjes said.
Delegates at the meeting, which opened on Saturday, endorsed stimulus measures to combat the economic crisis and clean up banks' bad assets.
Battling poverty
New estimates from the World Bank for 2009 suggest that the economic downturn will cause 46 million more people to live under $1.25 a day.
An extra 53 million will stay trapped on less than $2 a day on top of the 130-155 million people pushed into poverty in 2008 because of rising food and fuel prices.
The new forecasts suggest the UN's Millennium Development Goals (MDGs), which set specific targets to reduce poverty by 2015, may not be achieved.
The new research shows that markedly lowered economic growth rates will significantly arrest progress in reducing infant mortality.
If the crisis persists, 1.4 to 2.8 million more children may die during 2009 to 2015.
"The global economic crisis threatens to become a human crisis in many developing countries unless they can take targeted measures to protect vulnerable people in their communities," Robert Zoellick, the World Bank group president, said.
"This is a global crisis requiring a global solution. The needs of poor people in developing countries must be on the table," he said.
Zoellick recently called for the establishment of a "Vulnerability Fund" in which each developed country devoted 0.7 per cent of its stimulus package to the fund.
'Uncertain promise'
Delegates at the meeting signaled that the IMF would also sell bonds to developing countries to help raise a portion of an expected $500bn IMF loan fund to help recession hit economies.
Many people are arguing that IMF contributions are being directed to reinforce the structural status quo, benefiting already rich nations.
More decision making power within the IMF is also being demanded by emerging markets such as China, Brazil, India and Russia before they commit to the extra finances they are being asked to provide the fund.
China, for instance, holds 3.78 per cent of voting rights in the IMF, but leading economies are asking them for $40bn - 8 per cent - of the new fund.
Talking to the New York Times, Eswar Prasad, an economics professor at Cornell University in the US and a former senior economist for the IMF, said that the demand for extra decision making for emerging markets signified that they were "drawing a line in the sand".
"From the perspective of the key emerging countries, they are being asked to contribute a very substantial amount of resources in exchange for a very uncertain promise of reform," Prasad said.
Earlier this week, the IMF predicted the global economy would shrink by 1.3 per cent this year.
The IMF forecast marked a dramatic downgrade of previous estimates and set the tone for the meetings of the top steering committees of the 185-member IMF and World Bank.
PHOTO CAPTION
A young Indonesian girl carries her meal through an alley in a Jakarta slum dwelling.
Source: Aljazeera.net