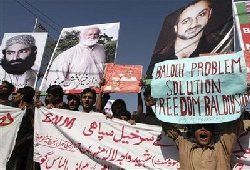 When common people use to say that, “America’s hidden agenda is to counter the nuclear program of Pakistan and take it under their control,” it was termed as the height of fanaticism & slogans of religious fanatics.

Since when US secretary of state Hillary Clinton has said, “Pakistan’s government had abdicated to the Taliban by agreeing to the Islamic law in part of the country and that the nuclear-armed nation posed a “mortal threat” to world security” and started raising doubts about the integrity of Pakistan and the advancement of Taliban towards Islamabad, it became in black and white that what type of role US is looking for itself in Pakistan in near future.
The recent hype in US and foreign media about Pakistan disintegration within a year or so, Baluchistan, Swat peace deal and the power struggle of Taliban to take over any territory, from where they could receive request to implement Shariah, looks like a systematic approach towards a defined anti–Pakistan strategy. Chain of articles in foreign newspapers depicting the unstable situation of two provinces of Pakistan, poll and survey that half of Pakistani population is unsatisfied to live within the federation, and statements from the exile figure heads stating the atrocities in most deprived areas, all are painting a picture of larger conspiracy against Pakistan!
All has started soon after present government has signed the peace deal in Swat. Initially it was countered through NGOs by highlighting the dark side of radical Islamist such as women flogging video and burnt schools etc. Once the countering strategy failed and Supreme Court distanced itself carefully to handle the case with true justice sprit, a new approach is adopted. Main ingredients of this new approach are as under:
First, to create hype in media as Pakistan is becoming unstable in few months and could disintegrate due to unrest in NWFP and Baluchistan provinces. Leading US figures are making comments about the integrity of Pakistan frequently.
Second, the strings of Pakistani nationalist leaders–in-exile are triggered in a way to show that their land and people are unsafe in Pakistan. Hence they started delivering sermon-like speeches highlighting the atrocities committed by central government against the people of various clans in their provinces. Probably the next step-advised to these nationalist leaders could be to knock the doors of United Nations against federation and in the name of people’s welfare and well being.
Third, Taliban have been portrayed as single largest military force, able to occupy Islamabad within hours. Their "anti-women" or "social" image has been presented with bad colors as if they take over the country, it would be path of disintegration. Altaf Hussain’s repeated statements against Taliban are pointing towards the same new approach.
Fourth, Taliban advancement propaganda is being presented in a way that they could reach the Nuclear arsenals of Pakistan, as if N–bomb is like an AK-47 rifle, and hence world would be unsafe.
Fifth, the distribution of aid funds, as discussed in “Friend of Pakistan” meetings, have been worked out in a way that they would be spend mostly in two provinces – NWFP and Baluchistan, by being the most deprived units of federation through foreign resources without the much interaction of federal government. Fortunately, this was countered by Saudi Arabia with an assumption that in near future, if the unrest in two provinces of Pakistan continues, the donors might ask United Nations to allow them to directly “deal with the situation” without the consent of federal government.
Within the larger context, all above elements are leading towards a larger conspiracy against Pakistan and probably in laymen terms, against its Nuclear Arsenal program, which has brought Pakistan to be at same level with neighboring India. This is high time for people of Pakistan to identify their real enemy within themselves – be it nationalist leaders living in exile, or groups with Taliban, or media men working upon the foreign orders or friends who are giving dollars, many wolves are hidden in sheep’s clothing.
PHOTO CAPTION
Supporters of Baluch National Movement carry posters of their leader as they march during a rally against killing of their leaders in Karachi, Pakistan on Sunday, April 12, 2009.
Source: dailymuslims.com