'Witness for Jesus' in Afghanistan 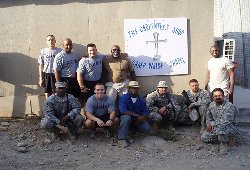 US soldiers have been encouraged to spread the message of their Christian faith among Afghanistan's predominantly Muslim population, video footage obtained by Al Jazeera appears to show.

Military chaplains stationed in the US air base at Bagram were also filmed with bibles printed in the country's main Pashto and Dari languages.
In one recorded sermon, Lieutenant-Colonel Gary Hensley, the chief of the US military chaplains in Afghanistan, is seen telling soldiers that as followers of Jesus Christ, they all have a responsibility "to be witnesses for him".
"The special forces guys - they hunt men basically. We do the same things as Christians, we hunt people for Jesus. We do, we hunt them down," he says.
"Get the hound of heaven after them, so we get them into the kingdom. That's what we do, that's our business."
Local language Bibles
The footage, shot about a year ago by Brian Hughes, a documentary maker and former member of the US military who spent several days in Bagram, was obtained by Al Jazeera's James Bays, who has covered Afghanistan extensively.
Bays also obtained from Hughes a Pashto-language copy of one of the books he picked up during a Bible study lesson he recorded at Bagram.
A Pashto speaker confirmed to Bays that it was a Bible.
In other footage captured at Bagram, Sergeant Jon Watt, a soldier who is set to become a military chaplain, is seen giving thanks for the work that his church in the US did in getting Bibles printed and sent to Afghanistan.
"I also want to praise God because my church collected some money to get Bibles for Afghanistan. They came and sent the money out," he is heard saying during a Bible study class.
It is not clear that the Bibles were distributed to Afghans, but Hughes said that none of the people he recorded in a series of sermons and Bible study classes appeared to able to speak Pashto or Dari.
"They weren't talking about learning how to speak Dari or Pashto, by reading the Bible and using that as the tool for language lessons," Hughes said.
"The only reason they would have these documents there was to distribute them to the Afghan people. And I knew it was wrong, and I knew that filming it … documenting it would be important."
Pentagon officials have so far not responded to a copy of the footage provided to them, but the distribution of Bibles in a place as politically sensitive as Afghanistan is bound to cause deep concern in Washington, our correspondent says.
Guidelines
It is not clear if the presence of the Bibles and exhortations for soldiers to be "witnesses" for Jesus continues, but they were filmed a year ago despite regulations by the US military's Central Command that expressly forbid "proselytizing of any religion, faith or practice".
But in another piece of footage taken by Hughes, the chaplains appear to have found a way around the regulation known as General Order Number One.
"Do we know what it means to proselytize?" Captain Emmit Furner, a military chaplain, says to the gathering.
"It is General Order Number One," an unidentified soldier replies.
But Watt says "you can't proselytize but you can give gifts".
The footage also suggests US soldiers gave out Bibles in Iraq.
In his address to a Bible study group at Bagram, Afghanistan, Watt is recorded as saying: "I bought a carpet and then I gave the guy a Bible after I conducted my business.
"The Bible wasn't to be 'hey, I'll give you this and I'll give you a better deal because that would be wrong', [but] the expressions that I got from the people in Iraq [were] just phenomenal, they were hungry for the word."
The footage has surfaced as Barack Obama, the US president, prepares to host Hamid Karzai, Afghanistan's president, at a summit focusing on how to tackle al-Qaeda and Taliban bases dotted along the Pakistan-Afghanistan border.
Asif Ali Zardari, Pakistan's president, will also take part in the talks in Washington, scheduled for May 5 and 6.
PHOTO CAPTION
A bible study group in Afghanistan
Source: Aljazeera.net