Calling to Islam in the best manners 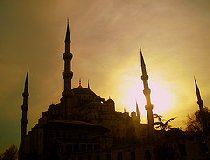 According to many scholars in this field, the term Da'wah (call to Islam) applies to conveying the message of Islam to non-Muslims and inviting them to Allah. Non-practicing and lost Muslims need to be reeducated and motivated to become better Muslims; they already know Allah Almighty and have been given the concept of Tawheed (monotheism). Some objectives of Da'wah are as follows:

(a) Conveying the message of Islam to non-Muslims and inviting them to Allah,
)b) Making efforts to remove misinformation about Islam and Muslims from text books, reference material and media,
c) Making efforts for the integration of new Muslims into the Muslim community,
)d) To develop material resources, recruit manpower (volunteers) and provide training for Da'wah workers.
Guidance is in the hands of Allah, but the goal of Da’wah is definitely to be a reason to convert people to be Muslims, to save them from the Hell Fire. To avoid aggressiveness as a result of that is for the caller to Islam to know that guidance is not in his control, it is by the will of Allah.
Is Da'wah a duty on every Muslim?
Yes, it is a collective duty, if some fulfill its rights then it is not a duty on every Muslim.
In the Qur'an, Allah has placed the responsibility on the Muslim Ummah (community) to convey the message of Islam to mankind. Allah, TheExalted, says in the Qur'an (what means): "Thus We have appointed you a model community (Ummah), that you may be witnesses against mankind, and that the Messenger may be a witness against you". [Quran 2:143]
'Witnessing', here, means to convey the message of Islam, i.e. to call people towards Allah.
Allah also Says (what means): "Invite to the Way of your Lord (i.e. Islam) with wisdom (i.e. with the Divine Revelation and the Qur’an) and fair preaching, and argue with them in a way that is better. Truly, your Lord knows best who has gone astray from His Path, and He is the Best Aware of those who are guided." [Quran 16:125]
Prophet Muhammad

completed his assignment in his lifetime by conveying the message to the entire Arabian Peninsula and sending letters to the heads of surrounding countries. In his Khutbah (ceremony) of his farewell Hajj (pilgrimage), he passed on the responsibility to every Muslim when he said

: "Those who are present should convey (my message) to those who are not". [Al-Bukhari]
Remember! Da'wah has great rewards. The Prophet

said: "Whoever guides someone towards good, will receive the reward of the one who acts upon it." [Muslim]
This means, if a person is converted through the Da'wah you give him/her, you get rewards for all the prayers he/she does or all the fasts that he/she does, etc.
General tips for Da'wah
·        The best Da'wah is to be a good example because people can see this without you having to talk to them.
1.     You should be a good example all the time, not just when doing Da'wah.
2. Don't be a hypocrite and not follow what you preach. For example: how would it look if you tell people that Muslims can't drink alcohol and then they see you drinking.
·        Smell good
·        Don't act like you're better than the person or people you are giving Da'wah to.
·        Don't insult the person or their religion.
·        Don't tell them that they are wrong and you are right and that they   are going to hell. But you have to be clear that the religion of the truth is the religion of Islam, and Allah doesn’t accept any other religions. And if a person dies in a state other than being a Muslim, he will be in the Hell Fire. This can be done in a wide way.
·        Don't get too deep in a subject you don't know much about, because if they have questions, you won't have answers.
·        Use common sense to explain Islam because much of Islamic ethics and rules are based on common sense and most people can relate to common sense
·        Dress according to the Sunnah, since the Sunnah of the Prophet

has so much blessings in it, and do not imitate the disbeliever.
Da'wah opportunities are everywhere
Just look for them. For example: you are invited for eating food with your co-workers, and they are going to eating pork. Let them know that you can't eat it. That is Da'wah. For teenagers specifically, whenever people are talking about dating or dances, tell them it is against your religion and why. It is not permissible for a Muslim to take friends that are disbelievers (eating pork, etc.) but if it is your co-workers, or so, then advice them. Also, it is not permissible to be present in a gathering that sins are involved.
The easiest people to give Da'wah to are the ones who already believe in Allah or some kind of deity. People who don't believe in Allah, atheists, are the hardest to give Da'wah to. Don't be afraid to give them Da'wah, but be prepared and be knowledgeable because they always look at everything from a short sighted materialistic view.
Methodology of Da'wah
·        When giving Da'wah, you have to be wise. Be careful of the words and think before you speak.
·        Know to whom you speaking to. For example, try to find out what they are interested in or if they have any problems. According to that, give them their information.
·        People will always be interested if it gives them an answer to their problem or it has something to do with them.
Da'wah to Christians
·        First of all, the best Da'wah is by your actions.
·        When doing Da'wah to non-Muslims, we should try to concentrate on what we have in common to them. For example: Islam and Christianity both believe that abortion is wrong. This is only to break the tension
·        We should let them know that we share many of the same ethics and manners.
·        Let them know that we believe in heaven, hell, angels, devils, the Day of Judgment, sins, repentance, and prophets.
·        Let them know we only believe in one Allah. And as a result, we worship Him alone, and explain what is the meaning of worship in Islam.
·        Avoid controversial issues, like is Jesus, may Allah exalt his mention, the son of Allah or just a Prophet. Don’t get in an argument, but it has to be mentioned clearly, that Jesus the son of Mary is a Messenger of Allah and not His son.
·        Do not insult them or put them or their religion down in any way.
·        Avoid argument and debates. This only leads to ruin.