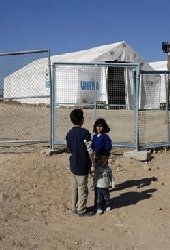 A United Nations inquiry into the war in Gaza has found that Israel was to blame for at least seven direct attacks on UN operations - including schools and medical centers.

The UN report, commissioned by Ban Ki-moon, the UN secretary-general, said the Israeli military intentionally fired at UN facilities and civilians hiding in them during the war and used 'disproportionate' force.
Missiles, bombs and small arms were all used by Israel against the UN - leading to dozens of deaths.
The UN's own fuel and aid depot in Gaza was hit with Israeli artillery shells causing widespread damage.
The attack continued for two hours after the UN asked the Israeli military for it to stop.
'Negligence and recklessness'
The report's summary accused the Israeli army of "varying degrees of negligence or recklessness with regard to United Nations premises and to the safety of UN staff and other civilians within those premises, with consequent deaths, injuries and extensive physical damage and loss of property."
Ban said at a news conference on Tuesday that the aim of the report, which is not legally binding, was to establish "a clear record of the facts" surrounding incidents involving UN premises and personnel.
A total of 53 installations used by the United Nations Relief and Works agency (UNRWA) were damaged or destroyed during Israel's Gaza campaign, including 37 schools - six of which were being used as emergency shelters - six health centers, and two warehouses, the UN agency said.
Al Jazeera's Kristen Saloomey in New York said the UN secretary-general was still determining the UN's course of action over the report's 11 recommendations.
The report said the UN would seek reparations for damages from Israel and meet the Israeli government.
Shimon Peres, the Israeli president, told Al Jazeera that the report was "one-sided" and that he hoped Ban would take into account Israel's response to it.
Israel's army concluded its own report into the three-week war on Gaza in late April, finding that Israel followed 'international law' and that while 'errors occurred they were unavoidable'.
Notorious incident
The report found that in seven out of the nine incidents involving UN premises or operations that it investigated, "the death, injuries and damage involved were caused by military actions ... by the IDF [Israeli army]".
The investigation included one of the most notorious incidents in the war, when up to 40 people are believed to have died at a UN school in Jabaliya after Israeli mortar shells struck the area.
The UN initially said the shells had hit the school but later retracted the claim, while Israel initially said its forces were responding to firing from within the school, but also later reportedly withdrew the statement, although the UN report noted the claim still appeared on the Israeli foreign ministry's website as of Tuesday.
The report also recommended that because there had been "many incidents" during the war involving civilian victims, an impartial inquiry should be mandated "to investigate allegations of violations of international law in Gaza and southern Israel by the IDF [Israeli army] and by Hamas and other Palestinian militants".
Israel's 22-day war on Gaza left more than 1,400 Palestinians dead, including around 400 children, Gaza health officials said.
Much of the coastal territory was also left in ruins.
Report 'flawed'
Mark Regev, an Israeli government spokesman, told Al Jazeera that the report was "fundamentally flawed" and contained "methodological problems are so deep that everyone has to ask on what basis they make these criticisms".
"Evidence shows one thing and the UN report clearly shows that they are not looking at reality."
Earlier this month an Israeli foreign ministry spokesperson confirmed to Al Jazeera that it would not cooperate with a separate UN Human Rights Council investigation into war crimes during the assault on the Gaza Strip.
The UN secretary-general commissioned the report, written by a special committee led by Ian Martin, former head of Amnesty International, in January, shortly after fighting ended.
PHOTO CAPTION
Palestinian children stand outside temporary tents for the United Nations Relief and Works Agency for Palestinian refugees near houses that were destroyed during Israel's 22-day offensive, in Jabalia refugee camp in the northern Gaza Strip.
Source: Aljazeera.net