Calling the Tribes to Islam 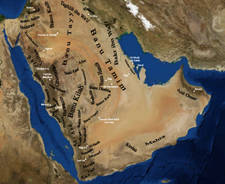 Years passed from when the Prophet,

, had begun calling the people of Makkah to Islam. They met his Da‘wah (call) with stubbornness and harmed him severely, but he endured all the hardships he met with great patience. The Prophet,

, wanted to spread his Da‘wah outside Makkah, hoping that he might find people there who would listen to him and realize that he was telling the truth and thus believe in him. He wished that some of the chieftains would believe in his Da‘wah and enable him to spread his guidance and provide protection for his poor and weak followers. Therefore the Prophet,

, focused his Da‘wah on certain tribes and their chiefs. During the fourth year of his mission, he began going to other tribes and continued calling people in the pilgrimage season to Islam. He took advantage of their gathering in that season and would call them to Islam every year. He would even explain Islam to each tribe separately, saying words to the effect of: “O Banu so–and-so, I am the Messenger of Allah who orders you to worship Him without associating any partner with Him and to give up everything that you worship other than Him. He also orders you to believe in me and protect me until I deliver the message that He has sent me with.” Moreover, whenever he would hear that any honorable or noble person would be visiting Makkah, he would go to him and call him to Islam.

Quraysh would receive the coming tribes with insults for the Prophet,

, and undermining his Da‘wah while trying to dissuade them from accepting it. His uncle Abu Lahab would follow him and drive people away from him. Among the tribes that the Prophet,

, was a wise man. He would go to these tribes at night so that the disbelievers would not see him. He was magnificent in the way he called people to Islam and would begin his speech with a proper introduction. When calling Banu Kalb, for instance, he started by saying: “O Banu ‘Abdullaah, Allah has chosen a good name for your father!”Despite the fact that people would reject the Da‘wah of the Prophet,

, he was patient and would seek the reward of Allah. He had a heart of gold, which was clear in a Hadeeth on the authority of the Mother of Believers, ‘Aa’ishah, who said that she asked the Prophet,

, “Have you encountered a day harder than the day of the Battle of ‘Uhud?" The Prophet,

replied:"Your people made me suffer a lot, and the worst thing I suffered at their hands was what happened to me on the day of Al-‘Aqabah when I presented myself to Ibn ‘Abd- Yaaleel ibn ‘Abd-Kulaal and he did not respond to my request. So I left, overwhelmed with excessive sorrow, and wandered around until I found myself at Qarn Ath-Tha‘aalib where I lifted my head towards the sky to see a cloud shading me unexpectedly. I looked up and saw Jibreel(Gabriel) in it. He called me saying, ‘Allah The Exalted heard what your people said to you and has sent the Angel of the Mountains to you so that you may order him to do whatever you wish to those people.' The Angel of the Mountains called and greeted me, and then said, 'O Muhammad! If you like, I will let Al-’Akhshabayn (i.e. two huge mountains surrounding Makkah) fall on them.'"The Prophet,

, said: “No, but I hope that Allah will let them beget children who will worship Him alone and will associate nothing with Him.”[Al-Bukhari and Muslim]
In the eleventh year of the Mission and during the pilgrimage season, the Prophet

met a group of young men from Yathrib (the former name of Al-Madeenah), from the tribe of Al-Khazraj, who were very sensible. They accepted his Da‘wah and took him with them to Al-Madeenah. Moreover, some other individuals responded to him, such as Tufayl ibn ‘Amr Ad-Dawsi, may Allah be pleased with him and Dhimaad Al-Azdi, may Allah be pleased with him, from Yemen, who went back to their people and called them to Islam.
In fact, Islam always finds a way to sound hearts, while those whose hearts are blocked will continue their deviation in disbelief and stubbornness. This is the Grace of Allah that He grants to whomever He wants. Allah is the Possessor of great bounty.