The master of all creation begins receiving revelation – I 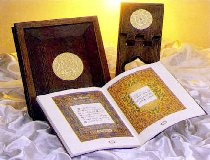 At the age of forty, the Prophet

would spend much of his time in seclusion in the cave of Hiraa’ contemplating the universe and its Creator. He would spend many nights in this cave worshipping Allah The Almighty. If he ran out of provisions, he would return home to take sufficient provisions for more nights. One Monday in Ramadan, Jibreel (Gabriel), may Allah exalt his mention, suddenly came to him for the first time in the Cave of Hiraa’. This event was narrated by Al-Bukhari

on the authority of ‘Aa’ishah, may Allah be pleased with her, who said,

The beginning of the Divine Revelation to the Messenger of Allah

was in the form of good visions which would then come true like bright daylight, and then the love of seclusion was bestowed upon him. He would spend time in seclusion in the cave of Hiraa’ where he would worship [Allah alone] continuously for many nights before returning to see his family. He would take with him enough food for the stay and then come back to [his wife] Khadeejah, may Allah be pleased with her, to take more food, until, suddenly, the Truth descended upon him while he was in the cave of Hiraa’.

The angel came to him and asked him to read. The Prophet

replied: “I do not know how to read.” The angel then caught him [forcefully] and pressed him so hard that he could not bear it. He then released him and again asked him to read, and he

replied: “I do not know how to read.” Thereupon, he caught him again and pressed him a second time until he could not bear it any longer. He then released him and again asked him to read, but again he replied: “I do not know how to read [or what shall I read]?” Thereupon, he caught him for the third time and pressed him, and then released him and said, {Recite in the Name of your Lord Who created - Created man from a clinging substance. Recite, and your Lord is The Most Generous - Who taught by the pen.} [Quran 96:1-4]
Then, the Messenger of Allah

described what he had seen. Waraqah said, “This is the same one who keeps the secrets [the angel Gabriel] whom Allah had sent to Moosa [Moses], may Allah exalt his mention. I wish I were young and could live up to the time when your people will turn you out.” The Messenger of Allah

asked: “Will they drive me out?” Waraqah replied in the affirmative, and said, “No man ever came with something similar to what you have brought except that he was treated with hostility. If I should remain alive till the day when you will be turned out, then I would support you strongly.” However, after a few days Waraqah died, and the Divine Revelation ceased for a while. [Al-Bukhari]
When reflecting over this Hadeeth, the researcher could deduct important issues that are related to the biography of the beloved Prophet

including the following:
1- ‘Good visions’: In the abovementioned Hadeeth, ‘Aa’ishah, may Allah be pleased with her, stated that the Divine Revelation started with the Messenger ‎of Allah

in the form of good ‎visions‎. Sometimes, such visions are called “truthful visions”, a term which refers to beautiful and cheerful visions that delight one’s heart and soul. The wisdom behind this order in the Divine Revelation (i.e. starting with good visions) was probably to prepare the Prophet

for seeing the Angel for the first time so that he would not be too frightened to receive the revelation from him. Hence, the Wisdom of Allah The Almighty entailed that he should receive the revelation first in his vision so as to be familiar with it.
As a matter of fact, a truthful vision is one part of forty-six parts of prophethood as mentioned in an honorable Hadeeth. The scholars stated that, “The period during which the Prophet

started having good visions, before receiving the actual revelation, lasted for six months as stated by Al-Bayhaqi

while he was wide awake”.
A good vision is an indication of glad tidings in this world as the Prophet

said: “O people, nothing is left of the Mubashshiraat [glad tidings] of prophethood except the good vision that the Muslim sees or that someone else sees for him.” [Ibn Maajah]
Thus, before the descent of Jibreel, may Allah exalt his mention, to deliver the Divine Revelation to the Prophet

in the cave of Hiraa’, the Prophet

would have good visions that would make him wake up feeling pleased, cheerful and ready to taste the beauty of this world. All narrations of the Hadeeth that covered the story of the beginning of the revelation unanimously agree that this was in ‎the form of good ‎visions‎. He would have these visions while asleep, and then they would come perfectly true like bright daylight when he woke up. The Prophet

would also remember these visions as if they were engraved in his heart and mind. The materialization of these visions was so vivid that ‘Aa’ishah, may Allah be pleased with her, who was among the most fluent and eloquent of Arabs, likened it to the appearance of daylight compared to darkness.
2- Seclusion was endeared to him. Thus, he would spend time in seclusion in the cave of Hiraa’ where he would worship Allah alone. Before prophethood, seclusion was endeared to the Prophet

so that his heart, mind and soul would be ready for what was to be revealed to him. Hence, for him, the cave of Hiraa’ was a place of worship, where he was able to isolate himself from worldly affairs and from mixing with people so that he could enlist his intellectual powers, spiritual feelings, passions and perceptions with the aim of dedicating himself to intimate discourse with the Creator of this universe.
As for the cave of Hiraa’ itself, then this encourages great contemplation. When one looks from the inside, he will see mountains that seem to be prostrating themselves before the greatness of Allah The Almighty. He will also see a clear sky and a clear-sighted person could also see Makkah.
This seclusion, which was endeared to the Prophet

was a special preparation for him, so that he could purify his soul from the blemishes of human materialism. This also proves that he was Divinely nurtured and disciplined throughout his life. Before prophethood, the Prophet

would worship through contemplating the magnificent realm of the heavens and the universal signs of the beautiful creation, great power and wonderful creativity of Allah The Almighty.
This has inspired some worshippers of Allah The Almighty to imitate this stage in the life of the Prophet

. During a certain phase of their journey to Allah The Almighty, they would seclude themselves performing Thikr (mentioning Allah) and worshipping Allah The Almighty to enlighten their hearts and release them from negligence, desires and sins.
Additionally, I‘tikaaf (remaining in the Mosque) during Ramadan is an act of the Sunnah that is important for every Muslim whether he is a ruler, a scholar, a leader, a merchant or anything else. The importance of this Sunnah lies in its ability to purify the soul and the heart from all blemishes. It also corrects our conditions in the light of the Quran and the Sunnah, and gives us an opportunity to reckon ourselves before being reckoned. It is also possible for wise Islamic callers to give themselves a period to review their attitude, repent to Allah The Almighty, consider the reality of Da‘wah (Islamic propagation) with its points of strength and weakness, and to study reality with its good and evil details.
‘Aa’ishah, may Allah be pleased with her, said, “He would worship [Allah alone] continuously for many days.” Shaykh Muhammad ‘Abdullaah Diraaz, may Allah preserve him, commented on this statement, saying, “The nights that the Prophet

would spend in the cave of Hiraa’ were neither very many nor very few. Moderation was the custom of the Prophet

before and after Prophethood - and then it became the main characteristic of Islam”.
The master of all creation begins receiving revelation – II