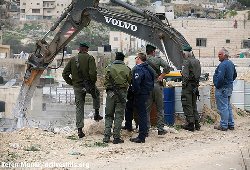 The Palestinian village of Silwan clings to a steep hillside facing the southern walls of Jerusalem's Old City.

In the valley below, Al Bustan neighborhood stretches out in the shadow of Haram al-Sharif, also known as the Temple Mount. It is a setting rich in meaning for Muslims, Jews and Christians.
But the Israeli authorities in Jerusalem have plans for the network of narrow alleyways and walled compounds that make up Al Bustan.
They say the area has been ear-marked for parks and open spaces – and most of the homes here were built without permits.
Which is bad news for Khaled Mohammad Rouwady, his children and grandchildren who live crammed together in a few small rooms.
Their house is among 88 buildings which have received demolition orders from the Israeli-controlled Jerusalem municipality.
The family has to pay heavy fines every month for living in what authorities describe as an "illegal structure".
"They give building permits to the Jews," Rouwady complains.
"They give them everything they need. But the Arabs living here in Jerusalem – they are finished, destroyed. They pay municipal taxes, they pay fines, but they have no rights."
If the municipality proceeds with its demolition plans, 1,500 people will become homeless. At one stage, local officials proposed moving the whole community to land in the Beit Hanina area on the outskirts of Jerusalem, far away from the holy sites.
The people of Al Bustan said no. Instead, they submitted an alternate zoning plan for their neighborhood, which was rejected by the district planning commission of the interior ministry.
'Holy basin' project
Another person who risks losing his home is the local imam, Sheikh Mousa Mahmoud Odeh.
He believes there is a systematic plan to remove Palestinians from areas close to the Old City and redevelop the area for Jewish residents and the tourism industry. And he accuses the municipality of working hand-in-hand with right-wing Jewish settler groups.
"I see a black future," said Sheikh Mousa. "The Jews are trying to displace all the Palestinians – from Silwan and from Jerusalem itself – so they can build a so-called 'holy basin'.
"They consider all places overlooking Al-Aqsa mosque to be part of that holy basin. I think that we have lost Jerusalem."
As the Palestinians are being squeezed out, the settlers are creeping in.
There are now about 70 Jewish families living in the Silwan area. They either buy homes from Palestinians or simply grab them under Israel's Absentee Property Law, claiming that they have been abandoned.
The Jerusalem municipality denies that it is involved.
"We don't have a plan as far as how many Jews or Arabs will live in East Jerusalem," says Yakir Segev, a member of the city council recently appointed by Mayor Nir Barkat to oversee the Arab eastern part of the city.
"When the municipality defines a certain area as a residential area, it doesn't say whether it's going to be Arab houses or houses for Jews. This is up to the owner of the land to decide."
The threat of this mass demolition has provoked a huge outcry.
The Fourth Geneva Convention forbids an occupying power from destroying the property of people living in the territory it controls.
However, the Palestinians are under no illusions about Israel's attitude to international law – and the people of Al Bustan remain vigilant.
PHOTO CAPTION
Israeli Forces during the demolition of a house in the West Bank.
Source: Aljazeera.net