On a mission to 'reclaim' Jerusalem 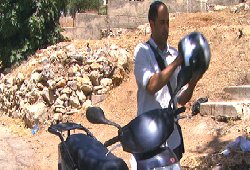 Arye King is an Israeli settler on a self-appointed "mission from God": to extend Jewish ownership over the whole of Jerusalem.

Armed only with a crash helmet and a list of properties which, he says, belong to Jewish owners, he travels by motor scooter around the Jerusalem area, posting eviction orders against Palestinians who believe they are living lawfully in the disputed homes.
On the day we join him, his "mission" takes him to Beit Zafafa, a Palestinian neighborhood in the south of the city.
The first target on his hit list: a hilltop Bedouin community whose goats are grazing on land which King asserts belongs to a Jew.
"There is an eviction order against these people who are living here," King says.
"They are Bedouins coming from the south mountains of the Hebron area. They are not even Israeli citizens.
"They are not Israeli residents, of course. They are here illegally in Jerusalem and especially they are squatting on a property that does not belong to them."
A version of history
Next stop: a Palestinian school where Arye King has decided to give the children a lesson in history – or at least, his version of history.
Tucked into the front panel of his scooter, he has a pile of leaflets in Arabic which he leaves on a low wall in front of the school.
"The leaflet here is a few sentences from the Noble Qur'an, chapters from the Bible, explaining to the young children where they are living," he says. "They are living in the land belonging to the Jewish nation."
The leaflet also encourages Palestinians to think about leaving the country and offers "help in finding work and accommodation in other countries" - a kind of ethnic cleansing, but delivered with a velvet glove.
Arye King is not alone. All over occupied East Jerusalem, Israeli settlers are making serious inroads into Palestinian neighborhoods, particularly those close to the Old City.
In Ras Al Amud, a second phase is being added to a Jewish settlement that was established in 1992. The new block consists of more than 60 apartments and will bring hundreds more Israelis into the area.
Just to the north, settlers have moved into an apartment block in the Mount of Olives. They have raised a huge blue and white Israeli flag from their rooftop to send their Palestinian neighbors a none-too-subtle message as to who is in charge.
Settlers' project
"We feel it's very important to possess the land, physically, and create these physical facts on the ground by buying the land, by settling Jews in this area, to make sure that this area is secured to the Jewish people and the state of Israel for ever," says Chaim Silberstein, the president of the Jerusalem Capital Development Fund.
The fund is a private organization that aims to "reclaim Jewish property in the city" and to buy land and houses from Palestinians.
The settlers' project is progressing quietly but not entirely without scrutiny.
Daniel Seidemann, a Jerusalem-based lawyer, has established an organization called Ir Amim in order to highlight issues affecting Israeli-Palestinian relations and the political future of the city.
Settlements feature highly in Ir Amim's work.
"We are holding on by our fingernails to the two-state solution," says Seidemann, standing on a hilltop overlooking the Old City.
"Today it is still barely possible to etch out a political boundary in Jerusalem which would be both acceptable to the parties and viable after the agreement is reached. We are very close to losing that. If current trends continue for another six months, a year or two years, this will be lost."
Israel claims Jerusalem as its undivided capital and the government is working with the settlers to turn that vision into reality.
The occupied eastern part of the city is being swallowed up, right under the nose of the international community.
Yet hardly a voice is raised in protest.
PHOTO CAPTION
Ayre King delivers leaflets to Palestinians he says are living "illegally" in Jerusalem.
Source: Aljazeera.net