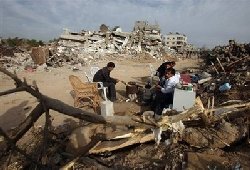 The International Committee of the Red Cross has described the 1.5 million Palestinians living in Gaza as people "trapped in despair".

In a report, it said that a main cause was the continuing Israeli blockade.
The report comes six months after the end of Israel's military offensive in Gaza in which at least 1,300 Palestinians died.
The Red Cross says that the people of Gaza are unable to rebuild their lives and sliding ever deeper into despair.
There is not the cement or steel to reconstruct neighborhoods destroyed by Israeli strikes.
Seriously ill patients are not receiving the treatment they need. The water supply is patchy, sanitation on the point of collapse.
Poverty is at what the Red Cross calls an "alarming" level. Large numbers of children are malnourished.
All this, says the Red Cross, is directly linked to Israel's tight closure of the crossing points into Gaza.
PHOTO CAPTION
Palestinians rest next to the rubble of their destroyed home in the northern Gaza Strip town of Jabalia in January 2009.
Source: BBC