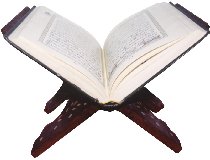 It is recommended for every believing man and woman to recite the Book of Allah, the Noble Quran, often, with due contemplation and understanding. This may be done by using a copy of the Quran or from one's memory. Allah the Exalted Says (what means): "[This is] a blessed Book (the Quran) which We have revealed to you [O Muhammad], that they might reflect upon its verses and that those of understanding would be reminded." [Quran 38:29]

"Indeed, those who recite the Book of Allah (the Quran) and establish prayer and spend [in His cause] out of what We have provided them, secretly and publicly, [can] expect a transaction [i.e. profit] that will never perish. That He may give them in full their rewards and increase for them of His bounty. Indeed, He is Forgiving and Appreciative."[Quran 35:29-30]

The aforementioned recitation of the Quran includes both reciting and acting upon it (abiding by what Almighty Allah enjoins in it and refraining from what He forbids in it). The recitation is to be done with contemplation and understanding of it. Sincerity to Allah is a means of complying with and acting upon the Quran, and its recitation contains a great reward - as the Prophet

said: "Recite the Quran, for on the Day of Resurrection, it shall come as an intercessor for its companion (one who recites and complies by its teachings)." [Muslim]
The Prophet

also said: "The best of you is he who learns the Quran and teaches it."[Al-Bukhari]
Another narration states: "Whoever reads one letter of the Quran shall receive a good deed and ten good deeds similar to it. I do not say that Alif Laam Meem is one letter, but Alif is a letter, Laam is a letter and Meem is a letter." [Imam Tirmithi]
The Prophet

: "Complete the recitation of the Quran once a month." He ('Abdullaah) said: "I am able to do more than that, O Messenger of Allah." So he

said: "Then complete its recitation once in seven days." [Al-Bukhari]
The Companions

used to complete the entire Quran once every seven days.
So, it is recommended that the readers of the Quran increase their reading of it, with contemplation and understanding it, along with sincerity to Allah - with the purpose of learning and benefiting from it. They should read the entire Quran once a month. If, however, they are able to do more than this without any difficulty, then they should complete it in less than this time.
However, it is best not to complete it in less than three days, since this is the least amount of time that the Prophet

. This is because if it is read in less than three days, the person becomes hasty and lacks thought and concentration while reading it.
Allah, the Exalted Says in the Glorious Quran (what means): "And the Messenger has said, “O my Lord, indeed my people have taken this Quran as [a thing] abandoned." [Quran: 25: 30]
So, Allah Almighty informs us about His Messenger Muhammad

said: "My Lord, my people have abandoned - acting or listening - to the Quran." And that is because the idol-worshippers did not pay attention nor listen to the Quran, as Allah Says (what means): "And those who disbelieve say, “Do not listen to this Quran and speak noisily during [the recitation of] it that perhaps you will overcome.” [Quran 41:26]
Thus, when the Quran was being read to them, they would deliberately make noise and futile speech so that they would not hear the Quran. However, this is from the ways of abandoning the Quran. Likewise, not having faith and trust in it is also from the ways of abandoning the Quran. Not pondering over it, nor trying to understand it, not acting by it, not obeying its orders and refraining from what it forbids, turning to something other than it - whether poetry, music, amusement, or other forms of vain speech and taking a path that is derived from other than the Quran are all from the ways of abandoning the Quran, of which we were strictly warned by Allah, the Exalted, and His Messenger