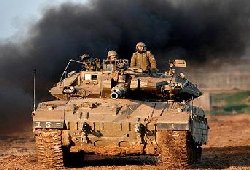 Troops fighting in Israel's war on Gaza were urged by their commanders to shoot first rather than worry about killing civilians, a document from an Israeli activist group shows.

Published on Wednesday, the document also gives an insight into Israel's policy of house demolitions and its use of white phosphorus during its 22-day campaign.
"Better hit an innocent than hesitate to target an enemy," one soldier is recorded as saying, speaking about instructions given to him in advance of the war, which ran from December 27 to January 18.
Another interpreted the orders given to him as: "If you're not sure, kill ... In urban warfare, anyone is your enemy. No innocents."
The Israeli military has rejected the criticisms, saying in a statement the they were "based on hearsay".
'Umbrella of fire'
Some of the testimonies record the use of white phosphorous, a controversial weapon that can cause chemical burns.
One soldier said that his unit had received an order to "ignite" an area.
"The way to do that was to actually fire phosphorus shells from above," he said.
"What the phosphorus does is to let out an umbrella of fire over the target and naturally that ignites the whole house."
The results of a white phosphorus bombardment were "upsetting" another soldier said, "because in training you learn that white phosphorus is not used, and you're taught that it's not humane".
International law permits the use of white phosphorus as an "obscurant" to cover troop movements and prevent enemies from using certain guided weapons.
Soldiers also describe a "Neighbor Procedure" in which civilians were forced to enter suspect buildings ahead of troops.
They cite cases of civilians advancing in front of a soldier resting his rifle on their shoulder.
An earlier report by rights-group Amnesty International accused Israel of "breaching laws of war" and accused it of putting children and other civilians in harm's way "by forcing them to remain in or near houses which they took over and used as military positions".
UN investigation
Israel has consistently said its troops had respected international law during its war on Gaza, in which over 1,400 Palestinians were killed, many of them children.
The UN says that Gaza, six months after fighting ended, is just beginning to clear 600,000 tons of rubble.
The soldiers' testimonies published by Breaking the Silence come soon after a UN team investigating war crimes in Gaza ended a week-long fact finding mission in the Strip.
The four-member team entered from Egypt after Israel failed to grant visas, despite repeated requests by the UN.
Israel accuses the UN branch carrying out the mission of "bias against it".
PHOTO CAPTION
An Israeli tank on the Gaza-Israel border
Source: Aljazeera.net