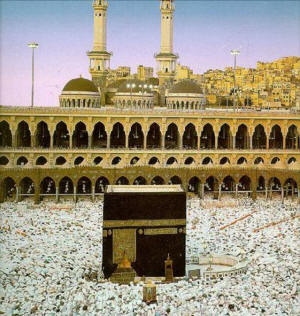 The Muslims wished to defend themselves and the peaceful circumstances they were required to maintain seemed to have provoked the anger of some Muslims, especially the youth. Abdur-Rahmaan bin ‘Awf and his companions, may Allah be pleased with them, went to the Messenger of Allah

in Makkah, and said, “O Prophet of Allah, when we were polytheists, we lived with honor, and now, after we have believed [i.e. embraced Islam], we have taken to humiliation.” He

replied: “Do not fight the [disbelieving] people, for I have been commanded to leave [them].” Some researchers discussed the Divine wisdom that lies behind not imposing fighting in Makkah, such as Sayyid Qutb

who said, “What we shall conclude in that matter is not decisive, otherwise, we would enforce an interpretation upon the wisdom of Allah The Almighty in a way that goes beyond what He has clarified, and impose reasons and causes which might or might not be the actual ones”.

A faithful believer has no choice but to totally submit to any obligation or ruling of the Sharee‘ah, for it is Allah The Almighty who is the Most Knowing and the Most Acquainted. However, we talk about this wisdom and the reasons for it simply by way of what our best efforts in understanding them are, which is a possibility and not a certainty, for none but Allah The Almighty knows the reality of what He did not elucidate to us through a clear text.
Some of those reasons and causes might be summarized as follows:
1-  Perhaps abstaining from fighting in Makkah was due to the fact that the time spent in Makkah was a period of nurturing and preparation in a particular environment for a particular people under particular circumstances. In this environment, one of the aims of this nurturing was to nurture the individual and accustom him to endure the wrongdoings that might afflict him which he was not used to enduring under the ordinary conditions in order to transcend his idiosyncrasy and subjectivity in such a way as not to hasten with the first impression, nor to be agitated by the first agitator. In this way, he would be moderate in his disposition and actions, be ready to follow the system of the new society, comply with the commands of the new leadership, and not behave but in accordance with its orders, regardless of it being in opposition to his customs and habits. This was the keystone of preparing the Muslim character for establishing the new Islamic society.
2- Perhaps it was due to the fact that the peaceful Da‘wah (call) was more effective and more influential in such an environment for the people of Quraysh, who were characterized by vainglory and dignity. Fighting people like those of the Quraysh at that time might have motivated them to become more obstinate and stubborn, and create new blood retaliations like those famous among the ancient Arabs such as the wars of Daahis, Al-Ghabraa’, Basoos and so on. There was no official authority to undertake the process of punishing the believers, but it was entrusted to the guardians of every believing individual to punish him.
3- Perhaps to give permission to fight in such an environment would have led to clash and killing within almost every home, which would have given cause for ascribing bloodshed to Islam, even though evil was ascribed to it despite the fact that Islam commanded the Muslims to refrain from fighting. The propaganda conducted by the Quraysh in the seasons of Hajj was based on the claim that Muhammad

was separating father from son, in the same way as he divided his people and clans. What would the situation have been then if Islam ordered the son (who believed) to kill his father (who punished him), and the slave to kill his guardian?
4- Perhaps that was due to the knowledge of Allah The Almighty that many of those who punished the Muslims in order to turn them away from their religion would themselves embrace Islam and become part of its sincere soldiers, if not the leaders of Islam. Was not ‘Umar bin Al-Khattaab, may Allah be pleased with him, one such person?
5- Perhaps it was due to the fact that in a tribal environment such as that one, Arab zeal would be ignited for the sake of those who were wronged and who relentlessly endured harm, particularly when harm was inflicted upon the noble and honored among them. In fact, many events confirmed the validity of this view in that environment. Take for instance Ibn Ad-Dughunnah, who was a disbeliever and who would not accept letting Abu Bakr, may Allah be pleased with him, a generous honored man, to forsake Makkah and emigrate from it, seeing this as something shameful to the Arabs. He, therefore, offered to grant him protection and security. The final episode in this regard was the cancellation of the pact according to which Banu Haashim were besieged in the narrow pass of Abu Taalib, which will be discussed in a later article, if Allah wills.
6- Perhaps it was due to the fact that at that time, the Muslims were still very few in number. They lived mainly in Makkah, for Da‘wah had not yet reached everywhere in the Arabian Peninsula, and even if it had, it was sporadic. Almost all the Arab tribes assumed a neutral position considering it to be no more than an internal war between the majority of the Quraysh and some of their people, in order to see what would be the outcome of the situation. Even a limited battle between the Muslims and the polytheists at that stage would have ended up with the annihilation of this meager number of Muslims, even if, in return for this, many times the number of Muslims would have been killed from the other party. By this loss of all the Muslims, Shirk (polytheism) would have remained prevalent for Islam would have had no distinct system or real entity on the earth, which is an antipathy given that Islam is a religion which came to be a way of life as well as a system for both this world and the Hereafter.
7- There was no compelling or pressuring necessity to transcend these considerations and enjoin fighting and avert harm. This is because the fundamental basis on which Da‘wah depended at that time was established, meaning, the presence of Da‘wah in the person of its caller, Muhammad

who was under the protection of the swords of Banu Haashim: no hand dared to extend harm to him for it was threatened to be cut off. For this reason, no one dared to hinder him from conveying his Da‘wah and publicizing this in the gatherings of the Quraysh around the Ka‘bah, over mount Safa, or in any of their public meetings. Also, at this stage at least, no one dared to imprison or kill him, or even dictate to him what he should say.
Those considerations, along with other things, we believe, presented the rationale for which Muslims were commanded by Allah The Almighty to refrain from fighting, and to rather establish prayers and give Zakah (compulsory charity), until their nurturing and preparation was complete. In this way, they would stand on the signal of compliance with the order of their leadership at the appropriate time. They therefore desisted from thinking about the whole matter, and left it to be decided by Allah The Almighty, in order that it would be sincerely in His cause when it did come.
From the Noble Quran, the Companions, may Allah be pleased with them, learnt the jurisprudence of benefit and harm, and the practical way of dealing with it in reality. Allah The Almighty Says (what means): {And do not insult those they invoke other than Allah, lest they insult Allah in enmity without knowledge. Thus We have made pleasing to every community their deeds. Then to their Lord is their return, and He will inform them about what they used to do.} [Quran 6:108] Thus, the Companions, may Allah be pleased with them, learnt that if the attainment of a benefit was to lead to a corruption that is of greater danger, then it should be avoided. This was out of moral improvement and the sublimity of belief, as well as a distancing from imitating the ignorant who are unaware of the facts, have no knowledge about Allah The Almighty, and do not sanctify His holiness. The Islamic scholars state that this ruling remains for the Muslim nation: if a disbeliever lives under protection and is not subject to the authority of Islam and Muslims and it is feared that he may abuse Islam or the Prophet

or Allah The Exalted, it would be unlawful for a Muslim to abuse his cross, his religion, his places of worship, or to do anything that leads to that, for by so doing, it would be as if he is urging him to commit a wrongdoing. This is a type of pacification and, at the same time, evidence of the obligation of the ruling of elimination of means that lead to unfavorable results.
The thirteen-year period spent in Makkah on raising, preparing and instilling the concepts of ‘There is none worthy of worship except Allah’, indicates the extent to which this creed is vital, as shown from avoiding hastiness and avoiding working against the clock. This creed is in need of being instilled so it would be permanently fostered and cared for in a way which leaves no place for hastiness and chaos. It is very befitting for the callers to Allah The Almighty to contemplate for a while the way the well-chosen

brought up his Companions, may Allah be pleased with them, upon this creed, in order to take lessons and examples to follow. This is because no one has the power to challenge Jaahiliyyah (pre-Islamic ignorance), whether it is ancient, modern or from the future, except those whose hearts have felt the joy of following the Divine creed, and in whose souls Tawheed (monotheism) has been deeply-rooted.