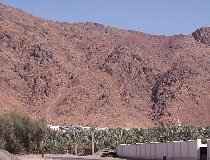 Mount Uhud is the largest mountain in Madeenah. It is located in the north of Madeenah and it consists of a group of mountains that extends from the east to the west with a length of seven kilometers. Its width is almost three kilometers, and it is at a distance of five kilometers from the mosque of the Prophet,

Mount Uhud is a historic place that only serves to increase the beauty of Madeenah, which teems with the fragrance of Islamic history. The Prophet,

, loved this mountain and would declare this love by saying: "Uhud is a mountain which loves us and which we love.” [Al-Bukhari and Muslim]
Mount Uhud relates to the famous historic Battle of Uhud that took place near this mountain and in which the polytheists were victorious during the second part of it. This was because of the mistake that was committed by the Muslim archers, as they disobeyed the orders of the Prophet,

, who ordered them to stay on the mountain to protect the backs of the fighters, but they descended as they thought that the battle was over and the backs of the fighters were exposed and the polytheists killed many Muslims. Indeed we belong to Allah, and indeed to Him we will return.
An important incident that took place during the Battle of Uhud is that the Prophet,

, and some of the Companions, may Allah be pleased with them, took shelter on Mount Uhud and it shook, so The Prophet,

, said: “O Uhud, be firm, for upon you there is none but a Prophet, a Siddeeq [an affirmer of the truth] and two martyrs.”[Al-Bukhari]
Mount Uhud was used in many similes and examples:
The Prophet,

, said about the legs of Ibn Mas‘ood, may Allah be pleased with him:“By Him in whose Hand my soul is, they are heavier in the scale than Mount Uhud.” [At-Tayaalisi]
The Prophet,

, said:
In order to show the reward of the Funeral Prayer, the Prophet,

, said: “The one who performs the Funeral Prayer will get a Qiraat [in reward], and the one who witnesses it until the dead is buried will get two Qiraats. By Him in whose Hands the soul of Muhammad is, the Qiraat is greater than this [Mount] Uhud.” [Ibn Maajah]
It is recommended for those who visit Madeenah to visit the graves of the martyrs of Uhud, greet them and supplicate Allah for them to a good effect.