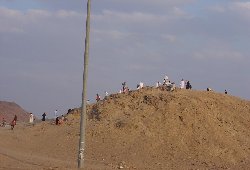 This is a small mountain to the north of the Mosque of the Prophet,

, at a three-kilometer distance outside Madeenah. This is the mountain that the Prophet,

, ordered the archers to remain on during the Battle of Uhud. The number of archers was fifty men who were in charge of protecting the backs of the Muslim fighters. They disobeyed the orders of the Prophet,

, as they thought that the battle was over. The polytheists seized the chance when the Mountain was without archers and they used it and killed many Muslims. Indeed we belong to Allah, and indeed to Him we will return.

This Mountain was originally called Mount ‘Aynayn, but after this incident it was renamed the Archers’ Mount.
Al-Baraa’ ibn ‘Aazib, may Allah be pleased with him, said,
The Prophet

appointed ‘Abdullaah ibn Jubayr as the commander of the infantry [archers] who were fifty on the day [of the Battle] of Uhud. He instructed them saying: “Stick to your place, and do not leave it even if you see birds snatching us, till I send for you; and if you see that we have defeated the polytheists and made them flee, even then you should not leave your place until I send for you.” Then the polytheists were defeated. By Allah, I saw the women fleeing, lifting up their clothes revealing their anklets and their legs. The companions of ‘Abdullaah ibn Jubayr said, “The booty! O people, the booty! Your companions are victorious, what are you waiting for?” ‘Abdullaah ibn Jubayr said, “Have you forgotten what the Messenger of Allah said to you?” They replied, “By Allah, we will go to the people [i.e. the enemy] and collect our share from the war booty.”
When they went to them, they were forced to turn back defeated. At that time the Messenger of Allah

was in their rear calling them back. Only twelve men remained with the Prophet

and the polytheists killed seventy men from us. [Al-Bukhari]