Imitating non-Muslims and the celebration of the New Year 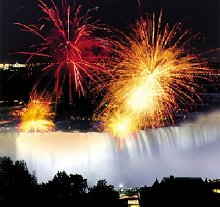 Nowadays, whenever anybody visits some of the Muslim countries, they find that the circumstances within them are quite different to what they would have expected. One only needs to set foot in these countries and begin to wander their streets to witness the tragic behaviour of its inhabitants.

When one observes the level of joy and ecstasy as the different classes of people within the Muslim communities prepare to receive Christmas and New Year’s Eve, it seems impossible to believe what one previously heard about the Muslim countries and how its people were adhering to Islam.
The entrances of hotels, cafés and stores are festooned with Christmas decorations; photographers dress up as Santa Claus and go around taking souvenir photos of people; florists compete in selling their produce for people who rush to buy it for this occasion regardless of the price. Some Muslims prepare to hold parties in their houses and hotels and these hotels have tempting special offers for people to hold their parties in their halls and party rooms during that period.
The media plays a huge part in propagating these celebrations; it prepares various television programmes and series in anticipation of these events.
The fact of the matter is that all of these actions represent a comprehensive imitation of western culture and can only be the result of very low levels of faith or indeed a total lack of it; to exhibit this type of behaviour is to strip oneself from the distinction and superiority of Islam and it is also an evil which makes Muslims who partake in such celebrations be included in the saying of the Prophet

: “He who imitates a people will be from among them (on the Day of Judgement).” [Abu Daawood] And in another narration, he

said: “The one who imitates people other than us (i.e., in faith) is not from us. Do not imitate the Jews or the Christians.” [Tirmithi]Imaam Ahmad

said: "The very least that this Hadeeth entails is the prohibition of imitating them (i.e., the Jews and the Christians); although it is also apparent that the Hadeeth labels the one who does so as a disbeliever (as Allah Says what means): “O you who have believed! Do not take the Jews and the Christians as allies. They are [in fact] allies of one another. And whoever is an ally to them among you – then indeed, he is [one] of them. Indeed Allah guides not the wrongdoing people.” [Quran 5: 51]
When Muslims imitate non-Muslims their rank in the Sight of Allah decreases. This is because a Muslim is superior to a disbeliever, so if he were to imitate a disbeliever then he would descend from his lofty rank to that which is inferior and this is a form of being ungrateful for the bounties of Allah and an insult to the religion of Islam because Islam is superior to everything else and nothing should be given priority over it.
Islam has established a path to guidance which differs from the culture and customs of the disbelievers regardless of whether they are from the people of the book or otherwise. Islam abrogates all previous religions and legislations and our Muslim nation is the one to be followed and not one which should blindly imitate others.
Anas ibn Maalik, may Allah be pleased with him, said: "The Prophet

arrived in Madeenah while people were celebrating two particular festivals, so he

asked: “What is (the significance of) these two days?” Some people replied: ‘They are days which we used to celebrate during the pre-Islamic era.’ So the Messenger

replied: “Allah has replaced them for you with two days which are better, the day of ‘Eed Al-Fitr and ‘Eed Al-Adh-haa”" [Abu Daawood]. Therefore, it is not permissible for a Muslim to celebrate New Year, because is it not one of the celebrations of the Muslims.
Muslim merchants and traders must not participate in any aspect of celebrating this day; they should not imitate the Christian merchants in the types of merchandise they sell during this period and they should refrain from decorating their shops with special lights and other kinds of decorations to commemorate this occasion.
Imaam Ibn Al-Haajj

mentioned in his book which mentioned the sayings of the Maaliki school of opinion in Islam: "It is not permissible for any Muslim to sell the Christians anything distinctly used during their religious celebrations, whether it is meat, grease or clothing; they should also refrain from assisting them in any of the affairs of their religion, because this is a form of honouring disbelief and aiding them in their disbelief and the Muslim leaders should forbid the Muslims from doing so. This is the ruling of Imaam Maalik and others and I do not know of any Islamic scholar who differed with this ruling."
It is our religious duty to boycott these celebrations; are we unable to prevent our children and other members of our household from participating in these immoral celebrations? How can a Muslim father watch his children prepare for these parties on New Years Eve and remain silent? Some parents even participate in this by purchasing items for the parties and by making their own plans for that night with their friends and relatives so that the way is paved for their children to spend the night with their girlfriend or boyfriend by listening to music, dancing, intermixing with the opposite sex and many other acts that Allah has prohibited and which would make morality shed tears and chastity protest.
Such parents seem to consider these actions as normal, despite the fact that they will certainly be held to account for the cultivation and upbringing of their children. Allah Says what means: “O you who have believed, protect yourselves and your families from a Fire whose fuel is people and stones…" [Quran 66: 6] Did such fathers, who did not prevent their children from celebrating the New Year protect themselves and their children from the Hellfire?
Fear Allah in your behaviour and actions; remain firm on His obedience and refrain from disobeying Him; encourage your wives and children to adhere to Islamic rulings and assist them in this; rebuke them and restrain them from committing sins so that you may protect yourselves from the Hellfire.
Many Muslims do not seem to realise that these celebrations are an integral part of the Christian religion and form part of its rituals. Being joyful and participating in their religious celebrations is in fact a celebration and an honouring of disbelief, which has a devastating impact upon the creed and faith of a Muslim.
How can a Muslim rejoice at any celebration of the non-Muslims while he reads the book of Allah in which He Almighty Says what means: “Neither those who disbelieve from the People of the Scripture nor the polytheists wish that any good should be sent down to you from your Lord…". [Quran 2:105]
How can a Muslim rejoice while he reads the words of Allah where He Almighty Says what means: “Many of the People of the Scripture wish they could turn you back to disbelief after you have believed, out of envy from themselves…” [Quran 2: 109]
How can any Muslim compromise his creed and faith and join the Christians in their rituals of disbelief while Allah Says what means: “They wish you would disbelieve as they disbelieved so you would be alike…” [Quran 4: 89]and, “If they gain dominance over you, they would be [i.e., behave] to you as enemies and extend against you their hands and their tongues with evil, and they wish you would disbelieve.” [Quran 60: 2]
Fear Allah and thank Him for having guided you to Islam and for making you distinct and superior by sending Muhammad

, the Prophet of mercy, especially for you. Allah has made you the best nation that was ever sent to mankind, provided you adhere to Islam and follow the Prophet

.
Be proud of your religion, because it is the only one that is based on sound creed, just legislation and honourable manners. Do not be deceived by what many people do for they are unaware of the reality of Islam; resist these evil innovations which have conquered our communities by boycotting these celebrations and be as Allah Says (what means): “Follow [O Mankind] what has been revealed to you from your Lord and do not follow other than Him any allies…” [Quran 7: 3]and do not be as Allah Says (what means): “And be not like those who forgot Allah, so He made them forget themselves. Those are the defiantly disobedient.” [Quran 59: 19]but do everything that will make you prosper in this life and the Hereafter.