The forbiddance of imitating non-Muslims - I 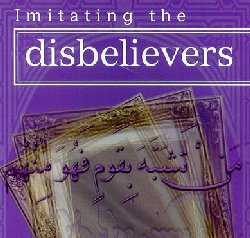 , said that some people from his Ummah (nation) will imitate the People of the Book in whatever they do. It was narrated on the authority of Abu Sa‘eed, may Allah be pleased with him, that the Prophet,

, said: “You will certainly follow the ways of those who came before you hand span by hand span, cubit by cubit, to the extent that if they enter the hole of a lizard, you will enter it too.’ We said, ‘O Messenger of Allah, (do you mean) the Jews and the Christians?’ He said: ‘Who else?’” [Al-Bukhari and Muslim]

This Hadeeth was also narrated by Al-Haakim

who judged it as authentic, on the authority of Ibn ‘Abbaas, may Allah be pleased with him. The end of the Hadeeth reads: “And to the extent that if one of them has sexual intercourse with his wife in the street, you will do so.” Al-Munaawi

said, “The chain of narrators of this Hadeeth is authentic.” [Tuhfat Al-Ahwathi]
Ibn Taymiyyah

said, “This reports the occurrence of such a thing and how such a person is reproached as he (i.e., the Prophet,

) foretold what people will do before the Hour comes, including the portents of the Hour and the things that are forbidden.” [Faydh Al-Qadeer]
Imaam An-Nawawi

said, “The “hand”, “cubit”, and “hole of the lizard” are used to indicate a state of extreme imitation (by Muslims of the People of the Book) and being complicit with them in sins and disobedience, not in disbelief. This is an evident miracle of the Messenger of Allah,

said, “By these reports on the deeds and sayings of the People of the Book, Allah The Almighty and His Messenger,

, forbade Muslims from imitating the People of the Book in their words and deeds, even if they have good intentions, because such deeds are outwardly the same as theirs.” [Al-Bidaayah wan-Nihaayah]
Al-Munaawi

said, “This is a miracle of the Prophet,

, because many people from his Ummah followed the Persians in their practices: the way they ride, they way they dress, and raising their slogan in war and elsewhere. Muslims also followed the People of the Book in decorating mosques, and glorifying graves to the extent that some common people virtually worship them. Other areas of imitation are accepting bribes, inflicting the prescribed punishments on the weak people and leaving the strong ones, and stopping work on Fridays.” [Faydh Al-Qadeer]
Al-Haafith Ibn Hajar

narrated through a good chain of narrators on the authority of ‘Abdullaah ibn ‘Amr, may Allah be pleased with him,‘You will follow the good and evil practices of those who were before you.’” [Fat-h Al-Baari]
Imitation has reached a great magnitude nowadays due to the technological progress achieved by the West, which has tempted many Muslims and helped to transmit their ideology and lifestyle from the farthest Western countries to the Muslim countries in a few seconds via the various mass media, visual and audio technology and the internet. The world has become like one house and the celebrations that are held in the cities of the world are seen by Muslims second by second as they are instantly transmitted from one city to another.
The Messenger of Allah,

, said: “Woe to the Arabs because of a great evil which is closely approaching them. It will be like patches of a dark night. A man will wake up as a believer, and will be a disbeliever by nightfall. People will sell their religion for a small amount of worldly goods. The one who adheres to his religion then will be like the one who is grasping an ember -- or thorns.” This Hadeeth was narrated by Ahmad

on the authority of Abu Hurayrah, may Allah be pleased with him. Having recited this Hadeeth, Al-Hasan

said, “By Allah, we have seen them as bodies without minds, butterflies falling into fire, and flies competing in greed. They go in the morning for two Dirhams and in the night for two Dirhams (they are motivated by money) and one of them would sell his religion for the price of a goat.” [Ahmad and Al-Haakim]
It should be known that festivals in Islam are acts of worship that draw the Muslim closer to Allah The Almighty. Muslims have only three feasts: the Friday ‘Eed, ‘Eed Al-Fitr, and ‘Eed Al-Adh-ha. It was narrated on the authority of Abu Hurayrah, may Allah be pleased with him, that he heard the Messenger of Allah,

, saying: “Friday is a day of ‘Eed, so do not make the day of your ‘Eed the day when you fast, unless you fast before or after it.” [Ahmad] [Ibn Abu ‘Aasim: Al-Aahaad wal-Mathaani] [Ibn Khuzaymah] [Al-Haakim: Saheeh]
It was narrated on the authority of Anas, may Allah be pleased with him, that he said, “The Messenger of Allah

came to Madeenah and they had two days when they would entertain themselves. He said: ‘What are these two days?’ They said, ‘We used to entertain ourselves on these days during the pre-Islamic period.’ The Messenger of Allah

said: ‘Allah has given you instead two better days: the Day of Al-Adh-ha and the Day of Al-Fitr.’” [Ahmad] [Abu Daawood] [Al-Haakim: Authentic on the condition of Muslim] Al-Haafith ibn Hajar

said, “This Hadeeth was narrated by Abu Daawood and An-Nasaa’i through an authentic chain of narrators.” [Buloogh Al-Maraam / Fat-h Al-Baari]
Ibn Taymiyyah

said, “The Hadeeth indicates that it is forbidden to imitate the disbelievers in their feasts, because the Prophet,

, did not approve of the two pre-Islamic feasts, nor did he let the people of Madeenah entertain themselves during them as usual. He just told them that Allah The Almighty had replaced such days with different ones, and replacing something with another thing entails giving up the former first” [Faydh Al-Qadeer]