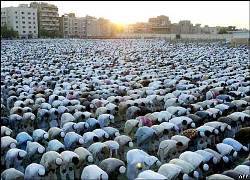 The risk involved in celebrating the holidays of the People of the Book is more severe than those of pre-Islamic times, for the Muslim Ummah (nation) was particularly cautioned against imitating the Jews and Christians, and informed that yet, a group of it would follow their traces [throughout history], whereas paganism would return only near the end of time. In this respect, it is narrated that a man came to the Messenger of Allah,

, and said: "I have vowed to slaughter camels in Bawaanah (a place near the seashore)." The Prophet,

, asked, "Would any of the idols worshipped during pre-Islamic days, be there?" When he received a negative response, he continued: "Were any of the [disbelievers’] feasts held in that place?" People replied, “No.” So, he,

Now that we know that even slaughtering a sacrificial animal for the Sake of Allah The Almighty, which is one of the most glorious acts of worship, is forbidden if done in venues where disbelievers hold their celebrations, then would it actually not be forbidden to celebrate those festive occasions themselves?

The word ‘Eed in Arabic literally represents a customary public gathering that takes place every year, month, week or so on. Therefore, ‘Eed is a symbol for:

", referring to both the prayer and gathering of Muslims.
‘Eed may or may not pertain to a particular place, such as in the Hadeeth: "Take not my grave as an ‘Eed", i.e., an oft-visited spot.
Each of the previous might be connoted as ‘Eed. The term is loosely applied to any perpetually honored time or place, or rituals performed in either of them, like prayer, slaughtering sacrificial animals, Thikr (remembrance of Allah The Almighty), etc.; as well as to relevant customs and [everyday] habits, such as entertainment, types of food and so on. But, to exalt any time or place which Islam does not, is to commit a prohibited religious innovation.
In the Hadeeth mentioned earlier, when the Prophet,

, asked whether there was an idol placed, or a festival held, in the place where the man intended to fulfill his vow, he was referring to the past and not the time when the question was posed to him. This incident took place during the Farewell Hajj (major pilgrimage), by which time, no idol or pagan festivals existed. However, the Prophet,

, implied the prohibition [of fulfilling his oath, if they once existed there], even if no traces remained then. He did so, to eliminate all means that might lead to preservation or revival of any of the holidays of the polytheists. Therefore, how would it be concerning those occasions and venues that the People of the Book still cherish and commemorate? Indeed, if Muslims honor and celebrate them, it would undoubtedly be more sinful.
The leader of the pious,

, prevented his followers, decisively and firmly, from celebrating the ‘Eeds of the disbelievers. He endeavored, in all possible ways, to eliminate and expunge these [festivals from within the Ummah], and, at the same time, to teach them to act contrary to the People of the Book, be it in everyday activities or modes of acts of worship. This is because such imitation might be a means of affinity with them in other aspects, too; equally, opposition in this respect would be an impediment in copying more of their practices.
The more you act contrary to the denizens of Hell, the further you are from deeds characteristic of them, and the more distant you are from the punishment of Hellfire. This is the gist of the advice the Prophet,

, gave to his Ummah, out of concern for them. Verily, this is but the bounty of Allah The Almighty on him and on all people, but most are not aware.