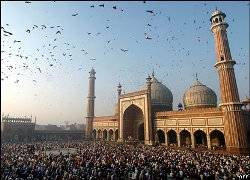 This is our ‘Eed

‘Aa’ishah, may Allah be pleased with her, recounts: “Abu Bakr came to my home while two small girls from the Ansaar (supporters in Madeenah) were singing beside me some of the poetry [penned by their tribe] on the Day of Bu‘aath [when war broke out between the tribes of Khazraj and Aws, with the latter emerging victorious]. They were not singers, but Abu Bakr [objected and] said: ‘Musical instruments of the devil (in reference to their singing usinf Duff - tambourine) are in the house of the Messenger of Allah

?’ This was on the day of ‘Eed; the Messenger of Allah

, statement: "This is our ‘Eed", affirms that each nation has its own festival that is unique to it, as further corroborated by Allah The Almighty in His Saying (which means): {To each of you We prescribed a law and a method.} [Quran 5:48] If the Jews have their special holidays, as do the Christians, it is then impermissible for us to celebrate with them, just as we do not share their Qiblah (direction to face in prayer) and law. Similarly, they are not to partake in our festivities, for the ‘Eed is part of [the Islamic] Sharee’ah, methodology and rites, akin to the Qiblah, prayer and fasting, regarding which Allah The Almighty Says (what means): {For every religion We have appointed rites which they perform.} [Quran 22:67]

Hence, there is no difference between celebrating their festive occasions and following the teachings of their religions. To agree on [fully participating in] a holiday with them is to be one with them in their disbelief; and to partly share in it with them is to share in some branches of disbelief.

Moreover, celebrations are among the most distinctive manifestations of a religious methodology; thus, to partake in non-Muslims’ festivals is to be in sync with them in the most defining characteristics of the laws of disbelief. The statement of the Prophet,

: "This is our ‘Eed", suggests that we are to suffice with our ‘Eeds [which he referred to], and so, need not take part in any other festivals.

Hence, it is impermissible for us to observe the holidays of the People of the Book, as we do our ‘Eeds. There were many Jews and Christians in the Arabian Peninsula, until ‘Umar ibn Al-Khattaab, may Allah be pleased with him, relocated them during the time of his caliphate, in implementation of the advice of the Messenger of Allah,

, who suggested that no two [dominant] religions can coexist in the region. Now, devotees of those faiths had many festivals, but Muslims never celebrated them in any manner. They neither changed their own festive customs during the holidays of the disbelievers, for they understood from their religion that this is forbidden. There was a possibility of that occurring and it would have transpired, had the Sharee’ah-ordained prohibition not been firm.

in his book Musannaf: "Beware of imitating the speech of the [disbelieving] non-Arabs and of entering upon the polytheists in their places of worship on the days of their festivals."

‘Umar, may Allah be pleased with him, was also reported to have instructed, “Avoid mingling with the enemies of Allah during their feasts.” [Al-Bayhaqi] If he forbade gathering with them on those days, then, what about actually joining in their festivities?

It is further narrated on the authority of ‘Abdullaah ibn ‘Umar, and ‘Abdullaah ibn ‘Amr, may Allah be pleased with them, that they said: "He who lives in the countries of [disbelieving] non-Arabs and observes their New Year's Day and other festivals, and imitates them until he dies, will be resurrected with them on the Day of Judgment." [Al-Bayhaqi] Being in their company in the Hereafter means that he may even die a disbeliever like them – this is closer to the text in meaning. Thus, his action [of imitation] is no less than a major sin.

Reason behind the prohibition

The grounds for the ban on celebrating non-Muslims’ festivals with them lie in the fact that imitation of them leads to disbelief or sin, and, actually results in no benefit at all. Agreeing [to take part] with them denotes being content with the evil they commit, keeping in mind that their festivities incorporate traditions that are unlawful, blasphemous and permissible. But, a willing participant [from Muslims] would fail to distinguish between them all.

-            Being one with them in their celebrations may also bring about a state in which a Muslim could hardly be told apart from a disbeliever. Since he would do the same as a non-Muslim who observes his religion, then, which distinctive characteristic would define the Muslim?

-            Furthermore, such concurrence [in festivals] leads to affection; and, whoever celebrates the holidays of the disbelievers undoubtedly loves them, or, at least, does not dislike their religion. Were he to really be as averse to it, as commanded by Allah The Almighty, he would never be one with them in any matter.

Surely, if a man considers another as an enemy due to a worldly reason, he would refrain from imitating him in anything that is typical of him. Then, how should it be for a person who takes someone as a foe, for the Sake of Allah The Almighty and His Messenger,

? Indeed, the [evil] individual is worthier of being taken as an enemy and opposed in deed, instead of being copied.

-            If a man takes his share of unlawful acts to fulfill some needs, his desire for, and benefit from, permitted deeds diminish, in accordance with how much he has attuned himself to what is impermissible. This situation is contrary to one who focuses his attention on doing only those deeds that are valid under the Sharee’ah that he adores immensely and with which he perfects his faith and Islam. For this reason, the more one is involved in the festivals of the disbelievers and agrees with them [on celebrating them, in principle], the lesser he is inclined to the ‘Eeds of Muslims. It is said that no people introduce a religious innovation, but that Allah The Almighty takes away from them its equivalent from the Sunnah. [Ahmad]

Verily, if He gave us instead, the best two days of all, then, to replace that good with anything else or to add other occasions to them, is an evil act. The hearts always long for ‘Eed and are pleased with festivities. So, if they have their share of it at other festivals, without a doubt, they will be indisposed to celebrate the ‘Eed granted by Allah The Almighty; its love and esteem will vanish, thereby causing their own reward to decrease and exposing them to evident loss. In confirmation of that, Allah The Almighty Says (what means): {You will not find a people who believe in Allah and the Last Day having affection for those who oppose Allah and His Messenger, even if they were their fathers or their sons or their brothers or their kindred. Those - He has decreed within their hearts faith and supported them with spirit from Him.} [Quran 58:22]

It should also be noted that he,

, let small girls sing acceptable songs that neither contained vulgarity nor were accompanied by musical instruments [except for the Duff, which is permissible for women to play on ‘Eed and at weddings]. The Prophet,

, even permitted the Abyssinians to enact a presentation of spears, which indicates the permissibility of entertainment and amusement in the ‘Eed of Muslims, but not at festivals of disbelievers.
For, had the latter been acceptable, he It should also be noted that he,

, would not have stressed [in the aforementioned Hadeeth]: “Let them be. Every Ummah has its ‘Eed; and this is our ‘Eed.”