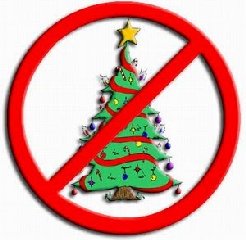 It is prohibited for Muslims to celebrate Christmas and other Christian festivals for the following reasons:

, warned us against introducing something new into the religion. ‘Aa’ishah, may Allah be pleased with her, narrated that the Prophet,

, said: "Whoever introduces something in our matter (religion) that does not originally belong to it, it will be rejected." [Al-Bukhari and Muslim] Another version of the Hadeeth (narration) that was narrated by Muslim reads: “Whoever does something that does not originally belong to our matter (religion), it will be rejected.” [Muslim]
Therefore, Muslims should not allocate a certain day to hold celebrations unless there is evidence in the Islamic Sharee‘ah that supports it.
Anas, may Allah be pleased with him, narrated that when the Prophet,

, came to Madeenah, the people had two days on which they used to engage in entertainment. He asked aboutthese two daysand said: “Allah The Almighty has given you better days instead: the Day of Fitr and Al-Adh-ha.” [Abu Daawood, An-Nasaa’i and others] [Saheeh (Authentic) chain of narrators]
The Prophet,

, banned celebrating their feasts so that they would not be rendered equal to those of the Muslims. In fact, if Muslim, rulers and scholars were to be apathetic regarding this issue, the common Muslims would glorify and celebrate the feasts of the non-Muslims just like their own feasts.
In fact, the birth and death of the Prophets are not considered religious events through which Muslims can draw closer to Allah The Exalted, and Muslims should not show either joy or sadness or any other similar aspects of celebration on these occasions.
Therefore, when the sun eclipsed during the life of the Prophet,

, people thought that it was because of the death of Ibraaheem, the son of the Prophet,

. Al-Mugheerah bin Shu‘bah, may Allah be pleased with him, said, "The sun eclipsed in the lifetime of the Prophet

on the day when (his son) Ibraaheem died. So people said that the sun had eclipsed because of the death of Ibraaheem. The Prophet

said: ‘The sun and the moon do not eclipse because of the death or life (i.e. birth) of anyone. When you see an eclipse, pray and supplicate Allah.’"  [Al-Bukhari]
Thus, there is no evidence in the Islamic Sharee‘ah (Islamic legislation) that validates celebrating the birth or death anniversaries of anyone, and it was not reported that the Prophet,

, his Companions or the knowledgeable scholars whom the Muslims follow, celebrated the birth or death anniversaries of any person.
The Prophet,

said: "Do not exaggerate in praising me as the Christians exaggerated in praising the son of Mary, for I am only a Slave [of Allah The Almighty]. So, call me the Slave and Messenger of Allah." [Al-Bukhari]
In fact, Islam banned Muslims from exaggeration in praising and glorifying the Prophets and warned against worshipping them instead of Allah The Almighty and raising their status above that which Allah The Exalted set for them. Indeed, the Prophets were sent by Allah The Almighty for people as bearers of glad tidings and warnings; they called people to worship Allah The Almighty Alone and not to worship them instead, or to exaggerate in praising and loving them.
Furthermore, it encourages the disbelievers and makes them feel that what they are doing is right, which is totally forbidden and is considered to be a grave major sin in Islam.  Allah The Exalted Says (what means): {O you who have believed, do not take the Jews and the Christians as allies. They are [in fact] allies of one another. And whoever is an ally to them among you – then indeed, he is [one] of them. Indeed, Allah guides not the wrongdoing people.} [Quran 5:51]
However, this ruling applies to Muslims who adopt this attitude towards Christians while not agreeing to their false religion and not approving [the doctrine of] Trinity, baptism, offering animal sacrifices for other than Allah The Exalted, living in a monastery and other such Christian practices. If Muslims were to adopt this attitude towards Christians deliberately (i.e., participating in their [false] religious rituals), they would be considered as disbelievers and apostates from the religion of Islam according to the consensus of the scholars.
However, common Muslims, who may be ignorant of Islamic teachings, are not able to differentiate between the two stances; hence, Muslims should shun going to temples and churches during that day i.e., Christmas Day, or any other day of the disbelievers' festivals as well.
The Prophet,

, said: “Whoever imitates a people becomes one of them.” [Abu Daawood] In fact, imitating the appearances and practices of others implies copying their beliefs as well and leads to the development of love and affection between the imitator and the one who is imitated. Hence, the law of Allah, The All-Wise, leaves no chance for Muslims to develop an affinity with the disbelievers, feel satisfied with their false religion and embrace their religion.
‘Eed Al-Fitr comes after Muslims fast the month of Ramadan and ‘Eed Al-Adh-ha comes after performing Hajj and [performing acts of worship in] the first ten days of Thul- Hijjah. ‘Eed in Islam is a source of joy, an act of worship, a means of offering thanks and repentance to Allah The Almighty and not a celebration of [the birth or death of] any created being or any worldly affair. In fact, this concept cannot be found in Christmas. The true Christianity to which ‘Eesa, may Allah exalt his mention, called people has been abrogated by Islam; hence, it is impermissible for Muslims to celebrate Christmas or follow any Christian religious practices.
The Prophet,

, always differed from the People of the Book, in performing acts of worship, appearances, morals, customs and in various affairs of life. For example, the Prophet,

, differed from the disbelievers in the Qiblah (direction of prayer), in the manner of parting his hair, prohibiting Muslims from standing for him as a sign of respect, dying his grey hair and in establishing the unique Islamic greeting and so on.
In fact, this is crystal clear from the narrations and life of the Prophet,

. Indeed, this is a fundamental principle in Islam to which Muslims should adhere. It was narrated that the Prophet,

, said: “You will follow the (wrong) ways of those before you so completely and literally that if they enter the hole of a lizard, you too will enter it.” The Companions inquired, “O Messenger of Allah! Do you mean the Jews and the Christians?” He replied: “Who else?" [Al-Bukhari and Muslim]  In fact, this is an obvious attitude adopted by the Muslims nowadays; may Allah help us.
For this reason, it is impermissible for Muslims to venerate Christian feasts, attend their celebrations, participate with them in any way, exchange gifts with Christians on these occasions, congratulate them, trade in what might help them to hold these celebrations and promote such feasts and celebrations.