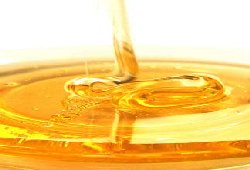 that Abu Sa'eed Al-Khudri, may Allah be pleased with him, said: "A man came to the Prophet

said: 'Give him some honey.’ The man went and came back later, saying, ‘I have given him some honey, but it did not help,' or he said, ‘it made his diarrhea worse.' He repeated this twice or three times, all the while the Prophet

continued saying to him: 'Give him some honey.' In the third or fourth time, the Prophet

said: 'Allah has said the truth while your brother's stomach has lied. Go back and let him drink honey.’ This time the ill man recovered.”

Honey has tremendous medicinal value, because it washes away the harmful substances that might be collected in the intestines and the veins. In treating diarrhea, honey promotes the rehydration of the body and more quickly clears up the diarrhea and any vomiting and stomach upsets. The anti-bacterial properties of honey, both the peroxide and non-peroxide, are effective against MRSA strains of bacteria which are notoriously resistant to antibiotics and are sometimes responsible for the closing of hospital wards.

Honey also dissolves excess moisture, is beneficial as a drink and as an ointment, it is of great value for the elderly, and those suffering from phlegm and cold moods or condition (chills). Honey is nutritious, softens one's bowel movement and is a good presetting agent.
In addition, licking honey on an empty stomach will help the body get rid of mucus and phlegm. It cleanses the stomach and rids it of harmful substances or mixtures, heats the stomach mildly and opens up the pores. Honey has similar effects on the kidneys, the prostate and the liver. Furthermore, honey is the least harmful sweet substance for congesting the liver and kidneys.
Added to all these benefits and many others, honey does not have any side effects, nor harm except for those suffering from bile and who should take it with vinegar to neutralize its harm.
There is no other substance that is more beneficial than honey or that even rivals its value. This is why the people of old relied on honey, for most of the books of old do not mention sugar, as sugar was discovered in modern times.
The Prophet

used to drink some honey mixed with water on an empty stomach. There is a wonderful secret behind this practice regarding preserving the health. He

said: "Make use of the two cures: honey and the Quran." [Ibn Maajah and others]
This Hadeeth joins the material and the divine cures, the medicine of the body and the soul, the earthly medicine and the heavenly cure.
Back to the story of the man inflicted with diarrhea mentioned above, the Prophet

repeated his command to the man to give some honey to his sick brother for a good reason. The prescribed medicine should be in sufficient doses; otherwise the ailment will not be fully cured. When the prescribed medicine is in a larger than necessary dose, it will weaken the body and cause side effects.
Prophetic medicine is not similar to that offered by doctors and physicians. Prophetic medicine is indeed the effective treatment and cure provided by the revelation and the guidance of the Prophet

that is coupled with a sound and perfect mind. In comparison, the majority of remedies prescribed by other than the Prophet

are based on hypothesis, observation and experimentation.
It is a fact that many people do not benefit from Prophetic medicine, because it will help only those who acknowledge and have faith in it. Thus, they believe that it will help them and they then submit to it. If the Quran, which is a cure for whatever the heart conceals, is not acknowledged and accepted with faith, it will not provide a cure for the heart. In fact, the Quran will only add more disease to the hearts of the hypocrites. This is also applied to the medications that sick people take nowadays. Specialists stress on the role of psychological factors in response to treatment. They say that in most cases, the patient should be convinced that he will be treated through this medication he has, otherwise the treatment would be ineffective.