His Wonderful Khutbah and Instruction to People 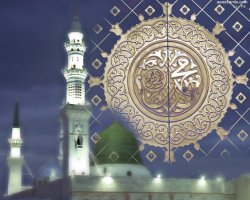 On a Thursday, five days before his death, the Prophet,

Before giving this great Khutbah, the Prophet,

, performed Ghusl (ritual bathing). People poured water over him from seven skins of water. This is included in seeking treatment by the figure "seven" as mentioned in authentic Hadeeths in this respect. In other words, the Prophet,

, first performed Ghusl and then went out, led people in prayer and then delivered the Khutbah. It was narrated on the authority of Jundub, may Allah be pleased with him, that he said,
I heard the Messenger of Allah

five days before his death, saying:“I stand acquitted before Allah that I ever took any one of you as an intimate friend, for Allah The Almighty has taken me as His intimate friend, as He took Ibraaheem [Abraham, may Allah exalt his mention], as His intimate friend. Had I taken any one of my Ummah [nation] as an intimate friend, I would have taken Abu Bakr. Beware of those who preceded you [i.e. previous nations] and would take the graves of their prophets and righteous men as places of worship. Do not take graves as mosques; I forbid you from doing that.” [Muslim]
It was narrated on the authority of Abu Sa‘eed A-Khudri, may Allah be pleased with him, that he said,
The Prophet

himself and Abu Bakr was the most knowledgeable among us. The Messenger of Allah

then said:“O Abu Bakr! Do not weep.”He added: “Abu Bakr has favored me much with his property and company. If I were to have taken an intimate friend from mankind, I would certainly have taken Abu Bakr, but the Islamic brotherhood and friendship is sufficient. Close all the gates in the mosque except that of Abu Bakr.”[Al-Bukhari and Muslim]
Summary: There are many lessons and benefits to be learned from this article, some of which are:
1-    The command of the Prophet,

.
3-    An encouragement to give preference to what is in the Hereafter to what is in this world. Moreover, the desire to remain in this word for some time should be intended to elevate one's degrees in the Hereafter by doing further righteous deeds in order to elevate one's degrees in the Hereafter.
4-    Thanking the benevolent person, hinting at his virtue and goodness and praising him. A person who does not thank people does not thank Allah The Almighty.
5-    A warning against building mosques over graves, including graves in mosques or putting images in them. No matter who is the one doing this, he is cursed and doomed as one of the most evil creatures in the sight of Allah The Almighty.
6-    The love that the Companions, may Allah be pleased with them, had for the Messenger of Allah,

, was greater than their love for themselves, fathers, children and all other people. Therefore, they were ready to ransom him with their fathers and mothers.