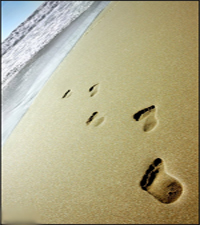 It was the habit of the Prophet,

, that whenever he did a particular deed, he would keep doing it regularly thereafter. Hence, he,

, said: “The dearest deeds to Allah The Almighty are those which are done regularly, no matter how little they might be.” [Al-Bukhari and Muslim]

In a Hadeeth on the authority of Abu Hurayrah, may Allah be pleased with him, he said that it was the habit of the Messenger of Allah,

, to practice I’tikaaf (seclusion in the mosque with thin intention of worship) every Ramadan for ten days. In the year of his death, he,

, stayed in the mosque in seclusion for twenty days. Moreover, the Quran would be recited by Jibreel (Gabriel), may Allah exalt his mention, for revision to him once every year. However, in the year of his death, the Quran was recited to him (for revision) twice. [Al-Bukhari and Muslim]
In a Hadeeth on the authority of ‘Aa’ishah, may Allah be pleased with her, she said,
The Messenger of Allah

would often say before his death:“Subhaanaka Allahumma wa bihamdika, astaghfiruka wa atooboo ilayk [Glory be to You, with Your praise (I exalt You). I ask for Your forgiveness, and I turn in repentance to You].” I asked him, “O Messenger of Allah, what are these words which I find you saying?”He

, replied: “There has been made a sign for me in my Ummah, whenever I would see it, I should say these words, (the verses which mean:){When the Victory of Allah has come and the conquest, And you see the people entering into the religion of Allah in multitudes, then exalt [Him] with praise of your Lord and ask forgiveness of Him. Indeed, He is ever Accepting of repentance.} [Quran 110]” [Muslim]
It was reported that Ibn ‘Abbaas, may Allah be pleased with him, said to ‘Umar ibn Al-Khattaab, may Allah be pleased with him, about this chapter, “It portended the death of the Messenger of Allah

about which Allah had informed him.” ‘Umar, may Allah be pleased with him, said, “I only know from this verse what you know.”[Al-Bukhari]
It was said that this chapter was revealed on the day of An-Nahr (slaughtering sacrifice- ‘Eed day), when the Messenger of Allah,

, was in Mina, during the Farewell Hajj. According to another saying, it was revealed on the days of Tashreeq (the three days after ‘Eed). According to At-Tabaraani

when this chapter was revealed, the Messenger of Allah,

, strove to the utmost of his power to do more deeds for the Hereafter. Hence, ‘Aa’ishah, may Allah be pleased with her, said, “The Messenger of Allah

would say in his bowing and prostration: ‘Subhaanak Allahumma wa bihamdik, astaghfiruka wa atooboo ilayk [Glory be to You O Allah, our Lord, with Your praise (I exalt You); forgive me].’ In this way, he was complying with (the order of) the Quran.” [Al-Bukhari and Muslim] This means that he

was thereby complying with the command given by Allah The Almighty to him as stated in His saying (which means): {Then exalt [Him] with praise of your Lord and ask forgiveness of Him. Indeed, He is ever Accepting of repentance.} [Quran 110:3]
Summary: There are many lessons and benefits to be learned from this article, some of which are:

How the Messenger of Allah Performed Hajj - II

How the Messenger of Allah Performed Hajj - I

His Acts of worship

Islam emphasizes the value of time and employing oneself constructively. This is evident in the way the Prophet, sallallaahu ‘alayhi wa sallam, led the Companions, may Allah be pleased with them,...More