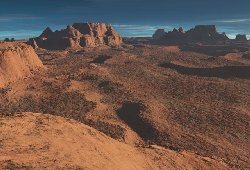 Here, we will discuss the events of a particular battle during which the Companions

experienced the highest degree of hardship to the extent that they wore shreds of leather and pieces of cloth instead of shoes and sandals. According to Islamic history, the events of that battle took place in the sixth Hijri year.
After overcoming the evil plotting of the Jews in Madeenah and after defeating the Quraysh and its allies, there was still another danger: the heartless Bedouins, who were living in the desert of Najd. These people derived their livelihood from highway robbery. On one hand, the Prophet

wanted to put an end to that danger and to overcome this evil, while on the other hand, he

wanted to provide the region with security and protection. Hence, when the Prophet

heard that those people were preparing to fight him, he

was determined to retaliate, and he

commanded his Companions to prepare themselves for the battle. They immediately responded to his command and prepared for the fight - and they numbered either 400 or 700 fighters.
The Prophet

set out along with his army from Madeenah. They realized from the outset that there were many hardships awaiting them as there was a severe shortage in mounts. Every six or seven men had to take turns on a single camel. What made matters worse was the unevenness of the earth and the sharp stones that tore their shoes and their fingernails. Hence, they had to wrap their feet in shreds of cloth and leather, and this was why the battle came to be known as that of Thaat-ur-Riqaa' (Expedition of Rags). In Saheeh Al-Bukhari and Saheeh Muslim, a Hadeeth was narrated on the authority of Abu Moosa Al-‘Ash‘ari

who said, “We would wrap our feet with shreds, and that is why the battle was called as such: Thaat-ur-Riqaa’.”
The Muslim army proceeded until they reached Nakhl, a place that belonged to Banu Ghatafan. When the Bedouins heard about the arrival of the Muslim army, they panicked and realized the seriousness of the matter. They then fled into the mountains, leaving behind their women and children.
However, the Prophet

was anxious that they might return and unexpectedly attack the Muslims, particularly because it was time to pray and the polytheists had been waiting for this moment when they could take the Muslims by surprise.
Meanwhile, Allah The Exalted relieved the Muslims of that hardship and revealed the verse in which He prescribed the prayer of fear and explained how the Muslims could perform it. Allah the Exalted Says (what means): {And when you are among them and lead them in prayer, let a group of them stand [in prayer] with you and let them carry their arms. And when they have prostrated, let them be [in position] behind you and have the other group come forward which has not [yet] prayed and let them pray with you, taking precaution and carrying their arms. Those who disbelieve wish that you would neglect your weapons and your baggage so they could come down upon you in one [single] attack. But there is no blame upon you, if you are troubled by rain or are ill, for putting down your arms, but take precaution. Indeed, Allah has prepared for the disbelievers a humiliating punishment.} [Quran 4: 102]
So, the Prophet

obeyed the Commands of his Lord and performed the prayer along with the Muslims as described in the verse. They finished their prayer and none of the feared expectations of the Prophet

materialized. Having achieved what he

wanted from that confrontation, the Prophet

chose to return to Madeenah.
On his way to Madeenah, as night approached, the Prophet

appointed two men, one of the Muhajiroon and one of the Ansar, ‘Ammar ibn Yasir and ‘Abbad ibn Bishr

saw him bleeding, he said, "Glory be to Allah! Why did you not wake me up from the beginning?" ‘Abbad

answered, "I was reciting a chapter from the Quran and I did not like to stop before I had completed it."
The next day, the Muslims rose early in the morning and marched until noon. When it was time to take a rest, the Prophet

stopped and the people dispersed to sit under the shade of some trees. A Bedouin came and found the Prophet

sleeping, and his sword which was left hanging from the tree while the Companions were dispersed throughout the valley. He picked up the sword of the Prophet

stood at his head and said to him, "Is there anyone who can protect you from me?" He thought that he had the Prophet

under his control but he did not know that Allah The Almighty had promised to protect and take care of him. The Prophet

with full certainty and confidence said: "Allah". Immediately, the Bedouin lost control of himself, and trembled until the sword fell from his hand. The Prophet

then picked up the sword and said to him: "Is there anyone who can protect you from me?" The man apologized to the Prophet

and begged to be set free. The Prophet

said to him: "Will you testify that none is worthy of worship except Allah?" The man said, "No, but I promise I will never fight you or be with those who fight you." Then the Prophet

freed him and his forgiveness had the greatest influence on that Bedouin, such that when he returned to his people, he said, "I have met the best of mankind."
These were the events of that battle. Allah The Exalted cast terror into the hearts of the Bedouins and, therefore, neither the tribes of Ghatafan nor any other tribe dared to raise their heads and attack the Muslims again, so much so that Allah The Exalted willed that these tribes would adopt Islam and participate in the conquest of Makkah and the battle of Hunayn.