The Prophethood of Muhammad 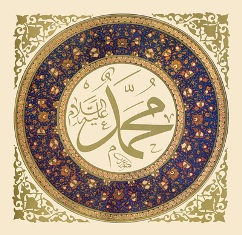 , was the final Prophet of Allah who was singled out to carry a divine message — the influence of which is still dynamic in today's society. Allah sent Muhammad,

, to convey His message to mankind at a time when the doctrine of monotheism had lost its practical significance and implications amongst the people of the scripture, while the Arabs were completely engulfed in the worship of idols and the darkness of polytheism.

The last Messenger of Allah was born when the whole world had forgotten the Message of their Creator and Sustainer and was lost in the wilderness of polytheism.
Allah chose Muhammad,

, to speak in His Name. The Holy Quran, which Allah sent down upon the Prophet's heart is a Holy Book from the Lord of the worlds to all mankind, to guide them to goodness and prosperity, inspire them with righteousness and warn them from the consequences of indecency and evil doings. Allah says (what means): {But we only sent you to give glad tidings and admonition.} [Quran 25: 56]
Revelation does not come to people haphazardly. Those who are chosen for it are the most perfect of all people in their intellects, virtue and character. All Prophets who came before Muhammad,

, were human beings, they lived ordinary lives like ordinary people, they talked, walked, ate, married and had children. They experienced suffering and pain and endured hardships in the cause of Allah. They were all under divine guidance; Allah says (what means):
· {We did send Messengers before you, and appointed for them wives and children and it was never the part of a Messenger to bring a sign except as Allah commanded ...}[Quran 13: 38]
· {And We sent no Messengers before you except that they [were men who] ate food and walked in the markets; and We have made some of you as a trial for others: Will you have patience? And your Lord is All-seeing.} [Quran 25: 20]
Muhammad,

, was no exception, He was a man like all other Prophets, he went through hardships and endured suffering and pain in the cause of Islam merely for the pleasure of Allah. He lived a life in which what applies to human beings applied to him, such as daily toil, being orphaned and bereaved and being afflicted by disease and death.
And Allah says what means: {Say, `I am not a new thing among the Messengers [i.e. I am not the first Messenger], nor do I know what will be done with me or with you. I follow naught but that which is revealed to me; and I am but a plain warner.'} [Quran 46: 9]
Allah's Messengers, may Allah exalt their mention, were the only people who influenced human life in its totality. They brought to the world virtue and goodness and removed from it evil and suffering. They purified the entire system of their lives from dissipation and malpractices and established justice and benevolence in their social, political and economic lives. They ruled over the hearts of people and changed their thoughts and beliefs through divine teachings and personal examples, and not by coercion.
Muhammad,

, was the only Messenger and man in the history of mankind whose entire record is fully preserved. Not only the important events of his life, but the record of his daily life from birth to death are written on the pages of history - all his sayings, doings and approving of things and the details of his conduct and character; even details of his life style such as how he walked, talked, dressed, cut his nails and comb his beard and hair, as well as how he treated his wives, friends, enemies, servants and slaves. So his life was fully known to his companions, may Allah be pleased with them, and was recorded as an open book, so that the following generations from all around the globe could follow and learn lessons, get inspiration from this perfect example and attain goodness, piety and success in their individual as well as social life. Allah says (what means): {You have indeed in the Messenger of Allah a beautiful pattern [of conduct] for any one whose hope in Allah and the final day, and who engages much in the praise of Allah.} [Quran 33: 21]
For more than fourteen hundred years Muslims have tried to awaken in the morning as the Prophet,

, awakened, to eat as he ate, to wash as he washed himself, even to cut their nails as he did. There has been no greater force for the unification of the Muslims than the presence of this common model for the minutest acts of daily life. A Chinese Muslim, although racially Chinese, has a countenance, behavior, manner of walking and acting that resembles in certain ways those of a Muslim on the other side of the world. This is because both have for centuries copied the same model. Something of the personality and soul of the Prophet,

, in his community by virtue of his Sunnah and Hadeeth. Allah told us in the Holy Quran to pray, but did not explain how, were it not for the Prophetic Sunnah we would not know how to perform prayers.
This applies to a thousand and one other situations so that it is almost unnecessary to emphasize the vital connection between the Qur'an and the Hadeeth of the Prophet,

, whom Allah chose as His revealer and interpreter to mankind.
What a great sacrifice from a great Prophet to live his public as well as his private life in the eyes of people, so that they could copy him and learn lessons from his perfect example who was under strict Divine guidance of his Creator!
Muhammad's standards of character and personality were far above those of other human beings. He possessed the best and noblest qualities of a human being as a boy, a man, a husband, a father, a trader, a legislator, a ruler and a statesman, an educator and a teacher. Muhammad,

, attained the highest moral and spiritual perfection and set the noblest ideal for prosperity, justice and rightness. All goodness and excellence seem to have combined in the person of Muhammad,

, as Allah says (what means): {And you [O' Prophet,] are on an exalted standard of character.} [Quran 68: 4]
The prophethood of Muhammad,

, had the unique characteristic of being global and eternal, it was a complete substitution for the sending of an army of Prophets distributed over the ages and the wide world. In fact it filled the need for this earth as long as men look forward to guidance and salvation.
He invited all mankind in spite of color, race or creed to the highest standard of behavior and virtue.
{We sent you not, but as a mercy for all the worlds.} [Quran 21: 107]
Since his childhood Muhammad,

, was searching for the truth, He never prostrated to any idol, and was very much disturbed with the appalling misery and evil of his time, He wondered and thought of the God of his forefathers Ibraaheem (Abraham) and Ismaa’eel (Ishmael), may Allah exalt their mention. His search for the truth in the darkness and wilderness of idolatry was answered by a Providential guidance and is described in the Holy Quran in this verse (which means): {And He found you unaware [of the Qur'an, its laws and Prophethood] and He gave you Guidance.} [Quran 93: 7]
The call which Muhammad,

, started in Makkah was not for a specific type of person but rather for all mankind. It was not for the building of a small nation but it was a new renaissance for nations and generations which would continue to inherit the truth and spread it around the globe until life and death end on this universe.
It was the most momentous of all revolutions known to the world, which undertook a mental and physical liberation of mankind.
Allah chose Muhammad,

, and prepared him from the first moment to carry this noble task and lead all righteous people chosen and selected by Allah. He conveyed the message perfectly and was always like a bright light in the darkness.