Virtues of ‘Umrah Performed in Ramadan 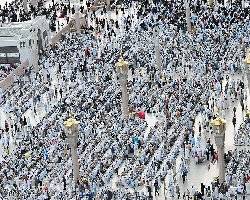 narrated, “When the Prophet

returned after performing Hajj (major pilgrimage), he asked Umm Sinaan Al-Ansaariyyah,‘Why did you not perform Hajj?’ She replied, ‘The father of so-and-so [i.e., her husband] had two camels and he went on pilgrimage on one of them, and the second is used for the irrigation of our land.’ The Prophet

said [to her]:‘An ‘Umrah (minor pilgrimage) in Ramadan is akin to Hajj with me [in terms of reward].’” [Al-Bukhari and Muslim] According to another narration, he told her: “When Ramadan comes, do ‘Umrah as [the reward for] it then is equivalent to Hajj."

Likewise, it was reported by Umm Ma‘qil

, said to her, "Perform ‘Umrah in Ramadan, as it is equal to ‎Hajj."‎[Abu Daawood] Similar Hadeeths were also narrated on the authority of Jaabir, Anas, Abu Hurayrah and Wahb ibn Khanbash

commented on the aforementioned Hadeeths, saying:

The sentence that ‘Umrah “then is equivalent to Hajj", proves that the Prophet,

, was actually encouraging her to perform a voluntary Hajj, as the whole Ummah (Muslim nation) has unanimously agreed that the ‘Umrah can never be a substitute for the obligatory Hajj. Moreover, what he,

, meant is that they are like each other in reward, but virtues cannot truly be perceived through analogy; and Allah The Almighty bestows His Bounty upon whom He Wills.
Benefits and rulings [derived from these Hadeeths]:
1-    The mercy and bounty bestowed by Allah The Almighty upon His slaves is great, as He granted them huge rewards in return for small good deeds; so, we praise Him abundantly for that.
2-    The Prophet,

, was keen on ensuring the welfare of his Ummah and would ask after those under his rule. Just as he was the sincerest confidant to all people, any slave whom Allah The Almighty puts in charge of subjects should treat them leniently, advise them, check on their conditions and serve their worldly and religious benefits.
3-    ‘Umrah done during the month of Ramadan cannot be a substitute for the obligatory Hajj, i.e., they are equal in reward, but the former does not replace the latter as a fulfillment of the obligation that is unanimously agreed upon by the scholars.
4-    The reward of good deeds increases in proportion to the virtue of the time they are performed in, as well as one’s heartfelt devotion and dedication.
5-    This Hadeeth is similar to the narration that says, “The Chapter Al-Ikhlaas (Purification) equals one third of the Quran”; it indicates that it is equivalent in terms of the reward of recitation, not that reciting it could, or should, substitute actually reciting [that much or] the whole of the Quran.
6-    The ‘Umrah here is considered equal to the Hajj in reward, when it is performed during the month of Ramadan, which is a great season for good deeds. Hence, whoever performs it then, enjoys the virtue of the place [i.e., the Sacred Mosque in Makkah] and time [i.e., Ramadan]; this is also the case with one who performs Hajj, as he is also in the same holy place and in a blessed time [i.e., months of Hajj].
In addition, doing ‘Umrah in the month of Ramadan ‎is more difficult. That is because one may be fasting while performing it or break his fast due to the traveling involved, and then have to make up for it. This is not the case when one performs ‘Umrah during any other month. The Prophet,

once, when he ordered her to perform ‘Umrah, "It [i.e., its reward] is according to your effort”, or, as per another narration, “according to your expenditure."[Muslim]
7-    This great reward is granted to whoever performs the ‘Umrah during the month of Ramadan, even if he [or she] returns immediately thereafter and does not prolong his [or her] stay in Makkah.
8-    These Hadeeths do not mean that it is recommended for one to perform ‘Umrah many times in the month of Ramadan or in a single day of it. This practice, which has become common today, differs from the Sunnah and traditions of the honorable Companions

as it was not reported that any of them used to perform many ‘Umrahs during the same journey to Makkah.
9-    Whoever performs ‘Umrah in Ramadan and intends to stay at the Holy Mosque during the whole month or its last ten nights, should guard himself against committing any prohibition, because evil deeds are more sacrilegious in Makkah than in any other place, not to mention, during the month of Ramadan.
10-    Whoever takes his family to stay at the Holy Mosque during the month of Ramadan, should take care that they, too, do not fall into committing any forbidden act; otherwise, he may return with sins that exceed the reward he came to earn, due to his negligence towards his wife and children.
11-    If one entered the state of Ihraam (ritual consecration) with the intention of performing ‘Umrah and reached Makkah while fasting, he has the choice of either breaking his fast to be able to do it immediately or waiting to do it until after sunset. It is better for him to break his fast during the daytime and perform ‘Umrah upon arrival, since doing ‘Umrah right after reaching Makkah, is what the Prophet,