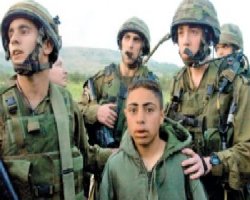 Israeli soldiers are routinely taking degrading photographs of dead and captured Palestinians and posting them on the internet, human rights groups have said.

The claims come a day after the Israeli military attempted to quell controversy over photographs showing a female soldier posing provocatively with blindfolded Palestinian detainees.
The Israeli military said on Monday that the pictures were "disgraceful" and insisted that the incident was in "total opposition" to the army's "ethical code".
But on Tuesday an Israeli rights group released a fresh batch of photographs, apparently showing Israeli troops posing with dead, wounded and captured Palestinians, which they said cast doubt on the official line that such incidents are rare.
Breaking the Silence, an organization that collects testimony from former soldiers, posted a folder on the internet containing nine pictures obtained from army veterans.
It is unclear when and where the pictures were taken, but the photographs appear to show armed Israeli soldiers posing with prisoners and bodies of dead Palestinians.
Common practice
Rights activists say that the phenomenon of taking so-called 'souvenir pictures' is widespread within the Israeli military.
"We released these because it seemed as if the IDF was presenting the pictures that came out yesterday as a one-off case," Mikhael Manekin, a campaigner from Breaking the Silence, told Al Jazeera.
"Pictures of soldiers with detainees are highly normative. The soldiers themselves aren't even embarrassed about these pictures, which show how normative they are."
Meanwhile, Israeli human rights group B'tselem said testimony from Palestinians corroborates anecdotal evidence that such pictures are not unusual.
In an incident in September last year, Muhammed Id'is, a Palestinian driver, says he was attacked by Israeli soldiers who took pictures on cell-phones while they beat him with their weapons and threatened to kill him.
"I wasn't able to walk and fell to the ground. The two soldiers kicked me in the stomach and back," he told B'tselem. "While I was lying there on the ground, the officer and the first soldier took pictures of me on their mobile phones."
In separate testimony gathered by the group, detainees reported hearing the click of camera shutters after being blindfolded by Israeli troops who had arrested them.
Michelle Bubis, a spokesperson for B'tselem, told Al Jazeera that the emergence of the new photographs suggests that these "are not isolated incidents."
"Regarding the pictures published, B’tselem cannot corroborate the precise incidents in which they took place, but reiterates that they are a clear violation of detainees right to dignity and an abuse of power by soldiers," she said.
Special monitoring unit
The growth in popularity of social networking sites in recent years has been a source of concern for the Israeli military, which has been hit by a series of setbacks caused by material its soldiers have posted online.
In March, officers were forced to call off a raid in the West Bank after a soldier published details on Facebook of the forthcoming operation.
In an effort to prevent similar incidents, the Israeli military has implemented strict rules on the type of information that soldiers can upload to the internet.
In addition, a special unit to monitor information posted online has been created in an effort to tackle the problem.
Members of the unit scan websites including Facebook, Twitter and MySpace looking for sensitive or embarrassing material posted by soldiers.
PHOTO CAPTION
An Israeli soldier uses his rifle to terrorize a Palestinian boy.
Aljazeera.net