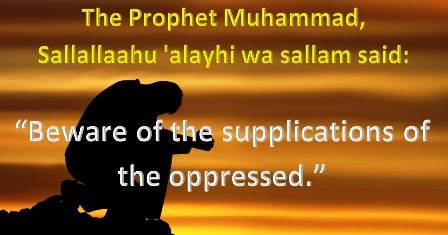 The following is a personal account: There was once a man who hired a worker; this worker would work, day after day, but not receive any payment. One day, the worker demanded his pay, but the employer refused to give him his money. It seems that the employer was in the habit of oppressing people and not giving them their money, to the point that it became a normal practice for him. The worker reminded the employer about Allah and His punishment, without any results.

The worker started telling others of his predicament, and the news spread, which made the employer become even more oppressive towards him; he wished to get rid of the worker, thinking that by firing him, or deporting him to his country, the case would end. So, sure enough, he fabricated a story against him, the result of which was that the worker was arrested and deported. The employer rejoiced at the result, but he forgot that an oppressed person’s supplications are never turned away by Allah; He says to the oppressed, in response to his supplications, as in the Qudsi narration: “I swear by my Might and Glory! I shall support you.”
After this had passed, one day, the employer got into his new four-wheel drive car and drove out into the desert to camp; he was not aware that Allah had planned something for him ... Punishment was descending whilst he was heedless. Suddenly, the car stopped, and if Allah had decreed for it to stop, then who could have made it move? A new car! But sure enough, it stopped. Indeed this is the punishment of your Lord! It stopped in the middle of the desert, but there was still another hope, as the man had his cell phone… However, that too stopped working! How did it suddenly stop working? What made it stop working? It was the command of your Lord that did so. The oppressor tried for that entire day to reach a safe place, but it was fruitless. Finally, he returned to his car, and in an attempt to avoid dying from thirst, he drank the water in the radiator, which did nothing but expedite the process of his death.
An evil way to die isn’t it? If this is the punishment in this life, how would his case be in the Hereafter?
I swear by Allah! When one hears such stories, he wishes to ransom himself, even if it entails paying all he owns in this life, so that he can avoid oppressing others!
The Prophet, sallallaahu 'alayhi wa sallam, said: “Beware of the supplications of the oppressed.” Depriving people of their rights, or refusing to pay them, is a form of oppression. Oppression generates hatred and spite, and makes the oppressed long for revenge; but there are some who only resort to supplication to Allah, so that He may support them and help them get their rights.
Another real life story is of a man who borrowed two hundred thousand from a friend of his, so that he could pay off some of his outstanding costs that he had accrued due to construction projects. However, when the time came for him to repay the debt, he denied ever taking the money, and since they were friends, it never occurred to the lender to document the loan.
From that day on, the borrower began making financial losses; his first loss was half a million; his wife reminded him of Allah, and emphasised that the loss was due to him not repaying what he owed, but he insisted in refusing to repay. Then, one day, three of his four sons were involved in a car accident and died. After this, he came to his senses and rushed to repay the man, fearing that Allah might punish him even more by depriving him of his wife and remaining son.
A sister narrated her story of oppression saying: “I was divorced twice. After my second divorce, I desired to marry a man who was already happily married, and whose wife my cousin was in love with and wished to marry. My cousin and I began spreading false rumours about the man’s wife, stating that she had an illicit relationship with another man; after a few months, we succeeded in implanting doubts in her husband’s heart, to the point that he divorced her. She then went on to marry a very influential person, and the man that I desired married another woman. Neither my cousin nor I got what we plotted for; instead, I was afflicted with blood cancer, and my cousin was burnt to death in an electrical fire; the only thing we got from oppressing others was to become afflicted.”
Finally, there is this story, of a student who envied a successful classmate and therefore planned to ruin his life: He brought some drugs to school one day and planted them in the other student’s schoolbag; then, he called the police, informing them that there was a drug dealer at the school. Sure enough, the police came, found the drugs, and arrested the student, which resulted in his reputation being ruined amongst his family and friends. The oppressor then related that he later became involved in a car accident and lost his right arm; then, after a while, he was involved in another crash and became handicapped and wheelchair bound - all of which resulted from his oppressing his classmate, who never ceased supplicating against him since then.
These were a few real life stories that we should ponder upon and take admonition from. 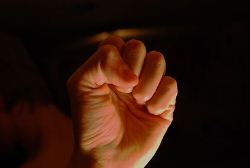