Refuting Historical and Religious Claims of the Jews in Palestine 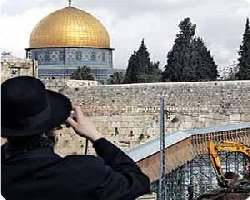 The Jews of today justify their occupation of Palestine on the basis of religious and historical allegations. They claim that Allah The Exalted promised them this land and point to their historical connection with it by virtue of their rule over it for a period of time, their presence in the area, their psychological and spiritual attachment to it, and its sacredness to them. We believe that the Jews have their religious freedom, and no one has the right to force them to change their beliefs; however, they have no right to oblige others to accept their belief. Besides, they are not entitled to displace a people from their homes or seize their land, property and sacred sites on the pretext of their religious claims.

Muslims do not acknowledge any right for the Jews to this land. Speaking from the point of view of religion, this land was given to the Children of Israel when they raised the banner of monotheism and adhered to it under the leadership of their Messengers and righteous people. However, they deviated, altered their religion, killed their Prophets and spread corruption on earth. Therefore, they lost their legitimacy, and Muslims believe themselves to be the real inheritors of the banner of monotheism and that they are the only true extension to the nation of monotheism and to the call of the Messengers. Muslims believe that the call of Islam is an extension and continuation of the call of Ibraaheem (Abraham), Is-haaq (Isaac), Ya‘qoob (Jacob), Ismaa‘eel (Ishmael), Moosa (Moses), Daawood (David), Sulaymaan (Solomon) and ‘Eesa (Jesus), may Allah exalt their mention. Thus, Muslims are now the most deserving people of this legacy after the former leaders deviated.
The issue is not related to gender, offspring or nationalism; it is associated with following the correct methodology. Therefore, we as Muslims believe that the legacy of the Prophets is our legacy, their experience is our experience, their history is our history, and the legitimacy given by Allah The Almighty to the Prophets and their followers in the governance of the Holy Land is evidence of our legitimacy and right to this land and its control. Allah The Almighty Says (what means):
Thus, Allah The Almighty told Ibraaheem, may Allah exalt his mention, that leadership is not meted out to the wrongdoers from among his progeny and descendants, because the issue is linked with constant observance of the methodology of Allah The Almighty. If the issue was linked to offspring, the children of Israel would not have limited it to themselves. Moreover, Ismaa‘eel, may Allah exalt his mention, and his descendants would be worthier of the promise given to Ibraaheem, may Allah exalt his mention; and so would the Arabs descending from Ismaa‘eel, may Allah exalt his mention, the grandfather of the Adnaaniyyah Arabs including the Quraysh and their master Muhammad,

.
Historically, the rule of the Children of Israel in Palestine was short and did not exceed four centuries over some parts of Palestine, and did not extend over the entire land. Muslim rule, however, lasted for about 12 centuries (636-1917 C.E.) which was interrupted for a short time by the Crusades. Most of the Jews had left Palestine and their actual disconnection from it remained for 18 centuries (from 135 C.E. until the twentieth century). On the contrary, the native people of Palestine did not leave it for over 4500 years until a large number of them were expelled by force by Zionist gangs in 1948 and until today, they are still struggling to regain their lands, refusing to give them up.
Furthermore, according to some Jewish researchers and scholars, led by Arthur Koestler the author of The Thirteenth Tribe: The Khazar Empire and its Heritage,  more than 80 percent of the Jews of today do not have any ancestral or historical affiliation to the children of Israel or Palestine. That is because most contemporary Jews are from the Jews of Khazar who originated from the old Tartarian and Turkic tribes that settled in the North Caucasus region (South Russia) and embraced Judaism in the eighth century under the leadership of king Bulan in 740 C.E. When their kingdom collapsed, they scattered throughout Russia and Eastern Europe, and they form what are now known as the Ashkenazi Jews. Therefore, if the Jews claim the right to return to any land, they should return to the south of Russia!