The Quran and Community 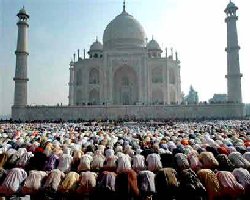 Virtually every human language has a word for ‘community.’ How could it be otherwise when community is of the core essence of the human experience? We are creatures of community. To live as part of one fulfills the most natural inclination to society that thrives in every one of us. This is the reason that the notion of community—simple, innate, intuitively understood—never did call for much discussion. It was that fundamental.

Not so since the caesarean birth of the modern, when man was untimely ripped from his natural social womb and delivered disoriented into moral distortion, unmanageable materialism, greed, injustice and arrogance. This has steadily led us to a gross reverence of individualism and a near total disregard for the common weal of man.

The result has been much more than the mere loss of an abstract communal sense among us (and its attendant avalanche of ugly ills). We have been forced to endure the degradation and, in some cases, the complete destruction, of the most essential humanizing component in life: The family.

Still, 'community' remains in wide use among all people. We invoke it at every turn because it is deep in our Fitrah (the natural predisposition upon which Allah The Almighty created mankind), our inherent tendency toward virtue. For community alone holds all earthly hope for our shared happiness and brotherhood.

It is a strange thing that something as ancient as community—a given for the pre-moderns, despite their technological and informational "deficiencies"—has become a cause of primary challenge in our time and at what price?

This points up another important note on community: The lack of proper understanding of what community means. This is the chief reason it is so hard today to establish and maintain one.

In this, there is, indeed, a sign for our confused times. It exposes a certain unawareness among our Muslim leadership, which has shown itself at a loss for identifying the wellsprings of community, though the Quran is utterly unambiguous about this.

The first thing about community in the Quran that rivets you is its massive emphasis. Aside from the topics of faith and Tawheed (Oneness of God), Ummah (Muslim Nation) - in its various forms - is the most widely mentioned concept in it. It establishes community as the standard by which we are to understand and reflect upon man. Allah The Almighty Says (what means): {O mankind, indeed We have created you from a male and a female and made you peoples and tribes that you may know one another. Indeed, the most noble of you in the Sight of Allah is the most righteous of you. Indeed, Allah is Knowing and Acquainted.} [Quran 49:13]

This is the most essential form of community intended by God Almighty for man—a single fellowship commanded to come together for the common good on the basis of monotheism. The Quran grants that material means may allow man gain in worldly matters. Yet only one criterion (God's reverence and worship—which the Quran refers to as Taqwa) forms the basis upon which man is to be judged. This makes Taqwa, reverencing only One God, the sole guidance worth living by. This is no mere abstraction. So let there be no ambiguity about it. Taqwa is entirely concrete.

If people find it difficult to grasp the rope of God Almighty by which Taqwa is represented, let's be frank, it is wholly due to one failing: The fact that establishing a community based on exclusive reverence for God Almighty alone means that some men cannot be lords over others. All are equal and must, therefore, render unto others what they expect from them in return. That is the reason why Taqwa is the only logical criterion of a just community. It is a direct measure of our willingness to believe in Allah The Most High and obey His commands.

Strikingly, the Quran tells us that the most important ingredient in establishing a community depends not on space, time, matter, or any other "chance" trait or relationship in the world. It is a bond of the human heart. The naked truth is no amount of human will or earthly means can bring it about. It is purely and explicitly an act of Divine Grace. Allah The Almighty Says (what means): {…And remember the favor of Allah upon you – when you were enemies and He brought your hearts together and you became, by His favor, brothers…}  [Quran 3:103] Thus, it is Allah, and Allah alone, who brings the hearts of a community together and binds them.

We need to appreciate that this is not an act of pure destiny but also a function of whether a people consciously chooses to internalize and live by the sterling standard of Taqwa, namely this: God is God. Man is Man. The First is to be worshiped. The latter is His servant, serving all others at His divine pleasure.