Excavations Under Al-Aqsa: An Imminent Danger 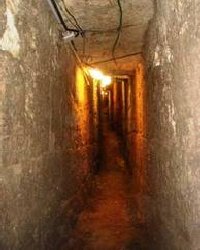 From time to time, there is a great deal of talk about excavations carried out by Zionist soldiers below Al-Masjid Al-Aqsa under the pretext of finding old antiquities that date back thousands of years to prove that they have a historical right to this blessed spot.

The Palestinian issue is considered the most important Islamic issue that all Muslims should support and stand in the face of its enemies and opponents, including the Zionists' attack on Al-Masjid Al-Aqsa. Consequently, we turned to the President of the Islamic Movement in Palestine and head of Al-Aqsa Foundation for Reconstruction of Islamic Sanctities, Shaykh Raed Salah, to clarify the truth about this attack and its serious dimensions. He kindly talked to Al-Bayan Magazine and said:

Some people may ask: How did we detect the issue of building a Jewish synagogue under Al-Masjid Al-Aqsa?

His response to this question: First of all, some information was leaked to us about significant excavations being carried out by Jewish bodies under Al-Masjid Al-Aqsa. We came to know that these excavations are more serious than all the excavations carried out by the occupation authorities many years ago. Given that, we launched Al-Aqsa Foundation for Reconstruction of Islamic Sanctities in the Palestinian territories occupied in 1948 C.E., in an attempt to access the excavation site and know what is happening there through secret methods.

We succeeded in accessing the specified excavation site and confirmed this by taking photos and filming several parts of the site. This was in addition to filming many other sites full of excavations and other Zionist hostilities which are currently being conducted directly under Al-Masjid Al-Aqsa.

Accordingly, we determined the location of these excavations on the map as well as their exact distance from Al-Masjid Al-Aqsa. This revealed the following:

- The Jewish body has built seven rooms to be a center to reflect the Jewish history, past and present. There is a 3-dimensional model in each room representing these historical stages. In one of these rooms, there is a model for what they call the "Destruction of the Temple". All these rooms are under Al-Masjid Al-Aqsa.

The construction of this building is very serious and its message is much more serious. Through these rooms, the Jewish  body is trying to falsely claim that the history of the Jews extends under Al-Masjid Al-Aqsa. This is a blatant assault and false, misleading and deceptive message for all the people on earth.

- At another site, there is a model symbolizing "The Temple Mount in Jerusalem". On the top, they have placed a model representing the Dome of the Rock. Those responsible for these sites show the removal of the Dome of the Rock before visitors and put in its place a model that symbolizes their alleged temple. They do so before tourists whom they bring from many countries. The Jews use this site in particular as an exercise in brainwashing to prepare the world for a desired goal, which is building the alleged temple at the expense of Al-Masjid Al-Aqsa.

- At the third site, there is a large model, the size of a room, surrounded by chairs in a circular graded form. Those responsible for this site receive chosen visitors and bring them to this place for brainwashing to convince them of the myth of the alleged temple and motivate them to support the scheme of building the Temple.

- At the fourth site, a two-floor Jewish synagogue was discovered 97 meters from the Dome of the Rock and parallel to it.

As for the impact of these excavations and the new discoveries on the structure of Al-Masjid Al-Aqsa, there is no doubt about the evidence of this activity, as there are cracks in the existing buildings of the Masjid. After examination, it becomes clear that the sole reason for this is the continuous Israeli excavations since 1967 C.E., the year in which the Zionist Jews occupied the city of Jerusalem.

Moreover, these excavations are supported by those who aim to reach the old structure of Al-Masjid Al-Aqsa and Al Musalla Al-Marawani, which are located directly underground. These two buildings are parts of Al-Masjid Al-Aqsa which is apparent above the ground. This means that these excavations are a grave prelude to appropriating these two buildings, one part after the other.

Blatant assault:
We should not forget that these recently instituted excavations and constructions are considered a blatant assault against the prestige and eminence of Al-Masjid Al-Aqsa in the eyes of Muslims. It is the place to which the Messenger of Allah,

, was taken on the journey of Al-Israa’ and it is the counterpart of the Honored Ka‘bah. This twinning is mentioned in the Surah (chapter) of Al-Israa’. It is also a religious, historical and cultural right of Muslims.

Regarding our demands in this respect, we have already announced all the previous information during a press conference. We explained it before the media and published all the photographs and maps in our possession all over the word. We will also bring this information to whom it may concern in the Arab and Muslim worlds, the Muslim World League, the Mosques Unions as well as all the heads of states and kings whom we can reach. We hope that these materials are held as a trust by all those who have it, so that each one assumes his role to ward off these serious assaults against the holy sites of Islam.
The scholars and preachers' role:
We are also preparing a message directed to Muslim scholars and preachers urging them to handle the issue of the dangers and excavations which threaten Al-Masjid Al-Aqsa on pulpits all over the world, particularly the pulpits of Al-Masjid Al-Haraam in Makkah and Al-Masjid An-Nabawi in Al-Madeenah. All this is to connect Muslims to what is happening in Jerusalem and to keep Al-Aqsa as well as all other Muslim holy sites alive in each Muslim's soul. The most important target of occupation is to keep the issue of Al-Aqsa and Jerusalem away from the Muslims' hearts and souls.
There are also significant steps being undertaken to reach out to the Arab and Muslim communities in Europe and America. Plans are underway to hold a conference in Europe to uncover the dangers which surround Al-Masjid Al-Aqsa and mobilize the entire world to ward off this assault. There is also a plan to hold a similar conference in America for the Arab and Muslim communities there. There are also efforts to organize a large-scale demonstration in the United States to support Al-Masjid Al-Aqsa.

Continuous moving to this place:
On the Palestinian level, we emphasize that we will continue to move to Al-Masjid Al-Aqsa, through processions of visitors which come from Al-Muthallath (the Triangle), Galilee and Negev, as well as the coastal cities: Acre, Haifa, Lod, Jaffa and Ramle, on a daily basis. This is within the framework of Maseerat Al-Bayaariq (the Journey of Banners) which started years ago and aims at creating a permanent link between the Palestinians who live in the territories occupied in 1948 C.E. and Al-Masjid Al-Aqsa instead of the Palestinians of the West Bank and Gaza Strip who are prevented from reaching the holy city.

We consider this permanent link, which is performed daily by tens of thousands of worshippers, a safety harness which maintains Al-Masjid Al-Aqsa and wards off daily Jewish attacks. This will contribute to avoiding serious danger and will protect Al-Masjid Al-Aqsa from a great assault.

Although we, in the territories occupied in 1948 C.E., excuse our brothers in the West Bank and Gaza Strip because they are prevented from reaching Jerusalem and live under a state of siege and barriers, this, however, absolves neither the Palestinian Authority nor the different Palestinian parties from the liability of making Jerusalem its top issue, especially under the current status quo.

Here I say: All Muslims should maintain constant vigilance, because the coming years will witness several attempts of sustained attacks against Al-Masjid Al-Aqsa and its future. Therefore, we, as Muslims, are required to be eligible to bear the trust through motivating all Muslims to fulfill their duty towards the Muslim holy sites and respond to the slogan that was sounded years ago: "Al-Aqsa is in danger!"