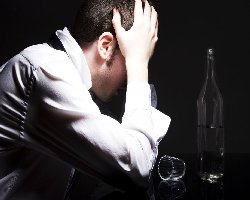 Alcohol is largely to blame for an "alarming" rise in the rate of oral cancers among men and women in their forties, say experts.

Numbers of cancers of the lip, mouth, tongue and throat in this age group have risen by 26% in the past decade.
Alcohol consumption has doubled since the 1950s and is the most likely culprit alongside smoking, says Cancer Research UK.
Each year in the UK around 1,800 people die from the disease.
There are 5,000 newly diagnosed cases per year.
Other risk factors that may be involved include a diet low in fruit and vegetables, and the sexually transmitted human papillomavirus (HPV), which also causes cervical cancer.
Figures produced by Cancer Research UK show that since the mid-1990s, rates of oral cancers have gone up by 28% for men in their forties and 24% for women.
The charity's health information manager Hazel Nunn said: "These latest figures are really alarming.
"Around three-quarters of oral cancers are thought to be caused by smoking and drinking alcohol.
"Tobacco is, by far, the main risk factor for oral cancer, so it's important that we keep encouraging people to give up and think about new ways to stop people taking it up in the first place.
"But for people in their 40s, it seems that other factors are also contributing to this jump in oral cancer rates.
"Alcohol consumption has doubled since the 1950s and the trend we are now seeing is likely to be linked to Britain's continually rising drinking levels."
The most common signs of the disease are ulcers, sores, or red or white patches in the mouth that last longer than three weeks, together with unexplained pain in the mouth or ear.
Alcohol Concern chief executive Don Shenker said: "Many people are not aware of the connection between alcohol and cancer, yet as this research shows, it can be a major contributor or cause of the disease.
"While alcoholic liver disease remains the number one killer linked to alcohol, more and more people are suffering from oral cancers - and record drinking levels have undeniably played a part."
He said it was time to introduce tobacco-style health warnings on alcohol.
Source: BBC