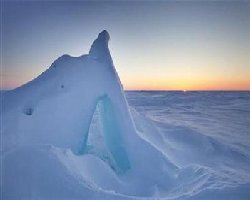 Ice in Greenland and the rest of the Arctic is melting dramatically faster than was earlier projected and could raise global sea levels by as much as 1.6 meters by 2100, says a new study.

The study released on Tuesday by the Arctic Monitoring and Assessment Program (AMAP) said there is a "need for greater urgency" in fighting global warming as record temperatures have led to the increased rate of melting.
The AMAP report said the corresponding rise in water levels will directly threaten low-lying coastal areas such as Florida and Bangladesh, but would also affect islands and cities from London to Shanghai. The report says it will also increase the cost of rebuilding tsunami barriers in Japan.
"The past six years (until 2010) have been the warmest period ever recorded in the Arctic," said the report.
"In the future, global sea level is projected to rise by 0.9 meters to 1.6 meters by 2100 and the loss of ice from Arctic glaciers, ice caps and the Greenland ice sheet will make a substantial contribution," it added.
The rises had been projected from levels recorded in 1990.
Dramatic rise from projections
In its last major study in 2007, the United Nations' Intergovernmental Panel on Climate Change (IPCC) said that sea levels were likely to rise by only between 18 and 59 centimeters by 2100, though those numbers did not include any possible acceleration due to a thaw in the polar regions.
The new AMAP assessment says that Greenland lost ice in the 2004-2009 period four times faster than it did between 1995-2000.
The AMAP is the scientific arm of the eight-nation Arctic Council.
Foreign ministers from council nations - the United States, Russia, Canada, Sweden, Finland, Denmark, Norway and Iceland -- are due to meet in Greenland on May 12, and will discuss the AMAP report's findings.
The report is expected to be discussed by about 400 international scientists at a conference this week in Copenhagen, Denmark.
"The increase in annual average temperature since 1980 has been twice as high over the Arctic as it has been over the rest of the world," the report said. Temperatures were higher than at any time in the past 2,000 years."
In its report, the IPCC had said that it was at least 90 per cent probable that emissions of greenhouse gases by human beings, including the burning of fossil fuels, were to blame for most of the warming in recent decades.
"It is worrying that the most recent science points to much higher sea level rise than we have been expecting until now," Connie Hedegaard, the European Climate Commissioner, told the Reuters news agency.
"The study is yet another reminder of how pressing it has become to tackle climate change, although this urgency is not always evident neither in the public debate nor from the pace in the international negotiations," she said.
UN talks on a global accord to combat climate change have been making slow progress, and the organization says national promises to limit greenhouse gas emissions are now insufficient to avoid possibly catastrophic consequences of global temperature rises.
Arctic could be ice-free
The AMAP study, which drew on the work of hundreds of experts, said that there were signs warming in the Arctic was accelerating, and that the Arctic Ocean could be nearly free of ice in the summers within 30 or 40 years. This, too, was higher than projected by the IPCC.
While the thaw would make the Arctic more accessible for oil exploration, mining and shipping, it would also disrupt the livelihoods of people who live there, as well as threaten the survival of creatures such as polar bears.
"There is evidence that two components of the Arctic cryosphere - snow and sea ice - are interacting with the climate system to accelerate warming," the report said.
The IPCC estimate was based largely on the expansion of ocean waters from warming and the runoff from melting land glaciers elsewhere in the world.
The AMAP report says that Arctic temperatures in the past six years have been at their highest levels since measurements began in 1880, and the rises were being fed by "feedback" mechanisms in the far north.
One such mechanism involves the ocean absorbing more heat as a result of not being covered by ice, as ice reflects solar energy. While the effect had been predicted by scientists earlier, the AMAP report says that "clear evidence for it has only been observed in the past five years".
Temperature rises expected
It projected that average fall and winter temperatures in the Arctic will climb by roughly 2.8 to 6.1 degrees Celsius by 2080, even if greenhouse gas emissions are lower than in the past decade.
"The observed changes in sea ice on the Arctic Ocean, in the mass of the Greenland ice sheet and Arctic ice caps and glaciers over the past 10 years are dramatic and represent an obvious departure from the long-term patterns," AMAP said.
"The changes that are emerging in the Arctic are very strong, dramatic even," said Mark Serreze, director of the US National Snow and Ice Data Center in Boulder, Colorado, and a contributor to the report.
"But this is not entirely a surprise. We have known for decades that, as climate change takes hold, it is the Arctic where you are going to see it first, and where it is going to be pronounced," he said by phone.
PHOTO CAPTION
The sun sets over Arctic ice near the 2011 Applied Physics Laboratory Ice Station north of Prudhoe Bay, Alaska March 18, 2011.
Source: Aljazeera.net