Glad Tidings and Blessings of Ramadan 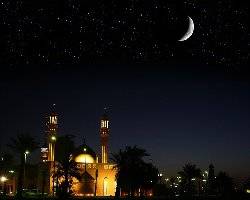 , used to give glad tidings to his Companions upon the arrival of Ramadan, and informed them that in this month the gates of Paradise are opened, the gates of Hell are closed, and the devils are chained. He,

said:“When the first night of Ramadan comes, the doors of Paradise will be opened and the doors of Hell will be closed, and the devils will be chained, and it will be said, 'O you who desires virtue! Come forth and O you who desires evil! Stay behind', and Allah has people whom He frees from Hell every night (in that month).” [Al-Bukhari and Muslim].

Many narrations commend the virtue of fasting in Ramadan, praying during its nights, and fasting in general. The Prophet,

, said:
Special attention should be paid to the five daily prayers, because they are the greatest obligation after the two testimonies of faith (Shahaadatayn). Men should perform these obligatory prayers with the congregation, as Allah The Almighty Says (what means):
The Prophet,

said: “The pledge between us (i.e., the believers) and them (i.e., the disbelievers) is (expressed by the performance of) prayer, whosoever abandons it has disbelieved.” [Ahmad].
The next obligation is paying the obligatory charity (Zakah). Allah The Almighty Says (what means): {“And they were commanded not, but that they should worship Allah, and worship none but Him Alone, and perform prayer and give Zakah, and that is the right religion" (Al-Bayyinah: 5)and also, “So establish regular Prayer and give regular Charity (Zakah); and obey the Messenger; that you may receive mercy."}[Quran, 24: 56]
After this comes the obligation of fasting the month of Ramadan, which is one of the five pillars mentioned in the Prophetic narration:“Islam was established on five pillars: the two testimonies (of faith), the establishment of prayer, fasting, obligatory charity and pilgrimage." [Al-Bukhari, Muslim].
A Muslim should guard his fasting and night prayers because the objective of fasting is to obey Allah The Almighty,  struggle against the soul's desires and whims by training one's self to patiently persevere, and refrain from what prohibited matters. Refraining from food, drink, and other things which nullify the fast was never the chief objective behind fasting. This is why the Prophet,