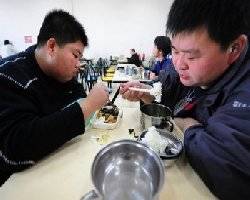 The number of adults who have been diagnosed with diabetes worldwide has more than doubled since 1980 to 347 million, a far larger number than previously thought, a new study has found.

An international team of researchers working with the World Health Organization has found that the rates of diabetes have either risen or, at best, remained essentially the same all over the world in the past 30 years, the study, published in The Lancet journal, says.
The estimated number of diabetics is far higher than a previous projection, which put the number closer to 285 million. Of the 347 million with diabetes, 138 million live in China and India, with another 36 million in the United States and Russia.
Type 2, the most common type of diabetes, is strongly associated with obesity and a sedentary lifestyle.
"Diabetes is becoming more common almost everywhere in the world," said Majid Ezzati, from Britain's Imperial College London, who led the study along with Goodarz Danaei, from the Harvard School of Public Health in the United States.
"Unless we develop better programs for detecting people with elevated blood sugar and helping them to improve their diet and physical activity and control their weight, diabetes will inevitably continue to impose a major burden on health systems around the world," Danaei said in a joint statement.
People who suffer from diabetes have inadequate blood sugar control, an affliction that can lead to serious complications, including heart disease, stroke, kidney or nerve damage and blindness.
According to experts, high blood glucose and diabetes lead to around three million deaths around the world every year, a number that will continue to rise as the number of people affected increases.
New treatments
Dozens of different treatments for the disease are available on the market in both pill and injection form. Global sales of the medicines hit $35 billion last year, and could rise to as high as $48 billion by 2015, according to IMS Health, a drug research firm.
New research that is due to be presented this weekend at the American Diabetes Association's annual meeting in San Diego will focus on experimental drugs and methods of combining classes of medication to better control blood sugar.
A new type of diabetes pill being developed by Bristol-Myers Squibb and AstraZeneca has proven to be effective at fighting the disease, according to a new two-year study, but the companies said higher rates of bladder and breast cancers were seen in users of the drug.
1.4 per cent of patients treated with Dapagliflozin developed some type of cancer, compared with 1.3 per cent of control group patients, said Elisabeth Bjork, vice president of development for Dapagliflozin at AstraZeneca.
"This is a chronic, progressive condition," said Dennis Urbaniak, vice president of drug-maker Sanofi's diabetes division. "What we are most worried about is the number of people out there with diabetes that is not optimally controlled."
Diabetes has proven to be a booming market for drug manufacturers like Novo Nordisk, Sanofi, Eli Lilly, Merck and Takeda.
For the Lancet study, the largest of its kind for diabetes, researchers analyzed fasting plasma glucose (FPG) data for 2.7 million participants aged 25 and over across the world, using advanced statistical methods to estimate the prevalence of the disease.
They found that between 1980 and 2008, the number of adults with the disease rose from 153 million to 347 million. Seventy per cent of the rise was due to population growth and ageing, with the other 30 per cent due to higher prevalence, they said.
The proportion of adults with diabetes by gender also increased, with 9.8 per cent of men and 9.2 per cent of women in 2008 affected by the disease, compared to 8.3 per cent and 7.5 per cent respectively in 1980.
Island countries in the Pacific now have the highest diabetes levels in the world, the study found. In the Marshall Islands, a third of all women and a quarter of all men have diabetes.
The rise was high in North America, but relatively low in Western Europe. Diabetes and glucose levels were highest in United States, Greenland, Malta, New Zealand and Spain, and lowest in the Netherlands, Austria and France.
The region with the lowest glucose levels was sub-Saharan Africa, followed by east and southeast Asia.
PHOTO CAPTION
File photo of patients eating at a weight-reduction clinic in Tianjin in northern China.
Source: Aljazeera.net