The virtues of Fasting Ramadan 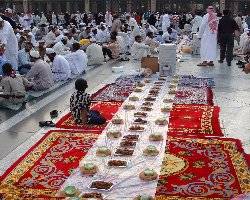 The righteous predecessors (the Salaf), may Allah be pleased with them, were very keen on pleasing Allah in any way they can and draw nearer to Him by means of performing different types of righteous deeds. They were more so during the blessed month of Ramadan because of its special status in Islam.

Allah The Almighty Says (what means): {The month of Ramadan [is that] in which was revealed the Quran, a guidance for the people and clear proofs of guidance and criterion.} [Quran 2: 185]
Allah The Almighty has distinguished the month of Ramadan from other months with many characteristics and virtues. They include the following:
Dear brother and sister,
These being the characteristics and virtues of this month, how do we receive it? Do we receive it with indulging in means of entertainment, by staying up late unnecessarily, with annoyance at its advent and rejection of its blessings? We seek refuge in Allah from all this. The righteous servant, instead, receives Ramadan with sincere repentance and sincere determination to utilize it and spend his time in doing righteous deeds.
There are many righteous deeds that are enjoined during Ramadan, but the most important of which is fasting.
It was narrated that the Prophet

said: "Every act of the son of Adam is for him, every good deed is multiplied in reward by ten times up to seven hundred times. Allah The Exalted said: 'Except fasting. It is (exclusively) meant for Me and I (alone) will reward it. He has abstained from food and drink, and sexual pleasures for My sake.’ The fasting person has two occasions for joy, one when he breaks his fast and the other when he meets his Lord. Surely, the breath of one who observes fasting smells better in the sight of Allah than the fragrance of musk." [Al-Bukhari and Muslim]
In another Hadeeth, the Prophet

said: "Whoever observes fasting during the month of Ramadan out of sincere faith and hoping to attain the reward of Allah, then all his past sins will be forgiven." [Al-Bukhari and Muslim]
Undoubtedly, this great reward is not for a person who abstains only from food and drink; rather, it is as the Prophet

said: "Whoever does not give up false speech and acting upon it, Allah does not need him to give up his food and drink." [Al-Bukhari]
In this context, the Prophet