Making the Most of Ramadan - II 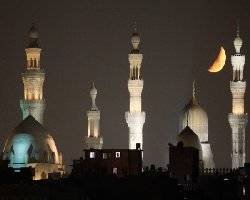 The month of Ramadan is the month of great gains and profits. The wise trader is the one who makes the most of special occasions to increase his profits. So make the most of this month by increasing in your acts of worship, praying a great deal, reading the Quran, forgiving people, being kind to others and giving charity to the poor.

In the month of Ramadan the gates of Paradise are opened and the gates of Hell are closed, the devils are put in chains and a caller cries out each night: O seeker of good, proceed! O seeker of evil, stop!
Therefore, O slaves of Allah, be among the blessed people, by following the path of your righteous predecessors who were guided by the Sunnah (tradition) of your Prophet,

, so that we may come out of Ramadan with our sins forgiven and our righteous deeds accepted.
The month of Ramadan is the best of months, as Ibn al-Qayyim

said,
“An example of the differentiation between the things that Allah has created – is the fact that the month of Ramadan is superior to all other months, and the last ten nights are superior to all other nights.” [Zaad Al-Ma‘aad]
This month is superior to others for four reasons:
1 – In it there is the best night of the year, which is Laylat-ul-Qadr. Allah The Almighty Says (what means): {Indeed, We sent the Quran down during the Night of Decree. And what can make you know what is the Night of Decree? The Night of Decree is better than a thousand months. The angels and the Spirit descend therein by permission of their Lord for every matter. Peace it is until the emergence of dawn.} [Quran 97:1-5]
So observing worship on this night is better than worshipping for a thousand months.
2 – In this month the best of Books was revealed to the best of the Prophets,

. Allah The Almighty Says (what means):
·        {The month of Ramadan [is that] in which was revealed the Quran, a guidance for the people and clear proofs of guidance and criterion} [Quran 2:185]
·        {Indeed, We sent it down during a blessed night. Indeed, We were to warn [mankind]. On that night is made distinct every precise matter [Every] matter [proceeding] from Us. Indeed, We were to send [a messenger} [Quran 44:3-5]
Ahmad and At-Tabaraani narrated on the authority of Waathilah ibn Al-Asqa‘, may Allah be pleased with him, that the Messenger of Allah,

, said: “When Ramadan comes, the gates of Paradise are opened and the gates of Hell are closed, and the devils are put in chains.” [Muslim]
Abu Hurayrah also narrated that the Messenger of Allah,

, said: “When Ramadan comes, the gates of mercy are opened, the gates of Hell are closed, and the devils are put in chains.” [An-Nasaa’i; Al-Albaani: Saheeh]
Al-Tirmithi, Ibn Maajah and Ibn Khuzaymah narrated in one report: “When the first night of the month of Ramadan comes, the devils and rebellious jinn are chained up, all the gates of Hell are closed, and none of its gates are opened. All the gates of Paradise are opened, and none of its gates are closed. A caller cries out: ‘O seeker of goodness, proceed; O seeker of evil, desist. Allah has those whom He redeems from the Fire every night.”
[Al-Albaani: Hasan].
If it is asked, how is it that we see many evil actions and sins committed in Ramadan, whereas if the devils were chained up, that would not happen?
The answer is that evil actions become less for those who observe the conditions and etiquettes of fasting, or that those who are chained up are some of the devils – namely the rebellious ones – not all of them, or that what is meant is that evil is reduced in Ramadan, which is a proven fact. If evil happens at this time, it is still less than at other times. Even if all of them (the devils) are chained up, that does not necessarily mean that no evil or sin will happen, because there are other causes of that besides the devils, such as evil souls, bad habits and the devils among humankind.
4 – There are many acts of worship particular to Ramadan, some of which are not done at other times, such as fasting, Qiyaam (voluntary night prayers), feeding people, staying in seclusion in the mosque, giving charity, and reciting the Quran.

Making the Most of Ramadan - I